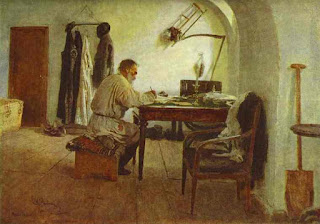 Portrait of Leo Tolstoy in His Study, Moscow, The State Literature Museum, 1891

I have been reading The Kickstarter Handbook.  It is a fascinating book.  The process of crowdfunding used on this site for creative projects is explained in detail.  Most people are not aiming to make money initially on the site.  It is more focused on creating a new product like lamp shade kits, personalized watches, indie films, games, music cds, and other products.  I think this book will be quite useful for independent minded artists.

This morning, I checked the displays, the gift books, and the Facebook and Twitter pages for the library.  We are discussing ordering tomorrow.  Right now, I am looking at the collection management sheet where people write down patron suggestions.  We have a few requests for new computer books.

The computer lab is open from 2:00 p.m. to 4:00 p.m. today.  I put the book, At the Mouth of the River of Bees by Kij Johnson on hold.  It is printed by Small Beer Press.  Small Beer Press press also published Redemption in Indigo by Karen Lord which is based on Senegalese folk tales.

I finished reading The Kickstarter Handbook.  Even the failures which are described are interesting.  The whole process to me is captivating.  I especially liked the Crania Anatomica Filigre project on Kickstarter which succeeded.  http://www.kickstarter.com/projects/joshharker/crania-anatomica-filigre-me-to-you?ref=live

It was done with 3D manufacturing.  There is a new book out by Chris Anderson called Makers: The New Industrial Revolution.  One of the things which 3D printing can do is make art objects that were not possible before.

Imaginary Friends-- A review of Michael Chabon's Telegraph Avenue in the New York Review of Books.
http://www.nybooks.com/articles/archives/2012/oct/11/imaginary-friends/
Posted by Book Calendar at 9:57 AM