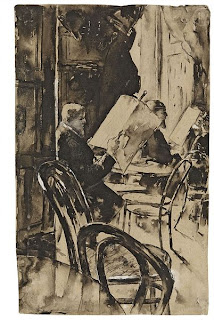 I read a bit more of Curation Nation this morning.  The author is talking about how it is important to keep close tabs on customers because anyone can create complaints then publicize them widely using the internet.

This morning, I made several telephone calls to remind people about programs, specifically the Computer Class tonight and a Writers Networking Event on Thursday.  I also updated the Twitter account and checked the displays.

I also visited the local history room to look up information on our library.  We were started in 1854 as a school library with 200 books which could be taken out by the adult community.  The current building was built as a Carnegie Library in 1904.  I learned we originally circulated sculptures, toys, and pictures in addition to books.  I rather like the idea of circulating sculptures.

I am prepping for a tour I do tomorrow for the Red Hatters which is a womens society.  Mainly I am going over the art in the buiilding including the murals in the Doric Hall entranceway.  On one side is the Ruins of the Parthenon and on the other side I think it is the ruins of Vesuvius done by Edward Gay in 1924.  We also have copies of the Unicorn Tapestry which is in the Cluny Museum in Paris as murals in the rotunda where we show art.  These were done by Louise Brann.  There is also a mosaic glass ceiling in the Doric Hall done by Alfred H. Freeman.  It looks like by Tiffany glass, but is not.

I also spent some time going through the clipping files looking up some of the local people that they were interested in.  We have extensive clipping files in the Local History room as well as lots of old photographs.  They probably should be digitized and organized a little better.  It was interesting looking at the old library bookmobile photographs from the 1920s.

On the way home, I read some more of Curation Nation.  It reminded me of how little time I spend in front of video camera.  I should probably get a smart phone and a video camera, but they cost a decent amount of money.
Posted by Book Calendar at 12:13 PM