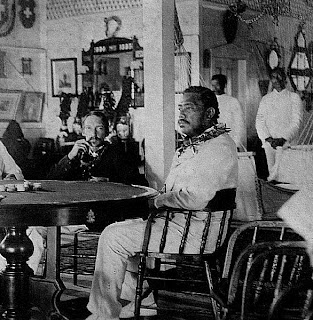 Photograph of Robert Louis Stevenson with King Kalakaua in his boathouse, February 3, 1889

Last night, I finished reading Ready Player One by Ernest Kline.  It is an immensely enjoyable novel especially if you like games and geeky things.  This morning, I started reading an advanced reading copy of Child Wonder by Roy Jacobsen.  It is a novel told from a child's perspective on the adult world.  The novel is a Norwegian novel.  The english translation will be released in October of 2011.  I tried to start reading Rule 334 by Charles Stross, but found some elements of the novel to be distasteful and a bit kinky.

This morning, I checked the Twitter account, checked the reference email, and went and got some snacks for the book chat this afternoon, and checked the displays.

The book chat went well.  It is part of the Adult Sumer Reading program. We did a round robin where people discussed the different books that they were reading during the summer.  Three books that were especially intereseting to me were Bloodlands Europe Between Hitler and Stalin by Timothy Snyder, another was Curation Nation How To Win In A World Where Consumers are Creators by Steven Rosenbaum, and a third was Bronx Primitive by Kate Simon.

The book, The Structure of Scientific Revolutions by Thomas S. Kuhn came in for me to read.  I am enjoying reading Child Wonder by Roy Jacobsen.  Childhood is different enough in Oslo, Norway to make things have that slight otherness which can be captivating as compared to the United States.  The story is quite sad.

Encyclopedia of Science Fiction Goes Digital, Searchable and Free
http://blogs.publishersweekly.com/blogs/genreville/?p=1337
Posted by Book Calendar at 11:15 AM