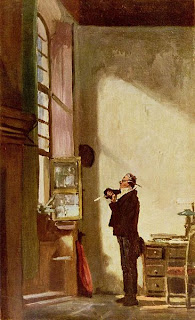 This morning, I read some of Made to Stick.  It is about why stories are memorable and hard to forget.  It sets a series of ideas on how to make what you are saying interesting.

We had a very nice donation of manga in the donations this morning.  There were copies of Naruto, Bleach, One Piece, Black Cat, GTO, Neon Genesis Evangelion, and other titles which were all in excellent shape.

I sent in my planned programs for the month.  I will have to print up flyers for the programs as well today.

Three books came in for me to read, Kevin Mitnick with William L. Simon, Ghost in the Wires, My Adventures as the World's Most Wanted Hacker, Hard Magic by Laryy Correia, and The Last Werewolf by Glen Duncan.

I also spent a little time reading Library Journal and Publishers Weekly today as well as making some flyers for upcoming programs.


I tried reading some more of Made to Stick on the way home on train, but got bored.  The information is useful, but it becomes repetitive.  I decided to read Ghost In The Wires by Kevin Mitnick.  It is quite interesting.  Kevin Mitnick comes across as being obsessed with computers and hacking and lacking in common sense or caution.  This makes for an excellent story.  He can's stop doing what he is doing even when he is caught repeatedly.

I watched half an hour more of the CS 5 Indesign class which is about half way through the class.  I still have an hour to go.  I'll probably then read InDesign CS5 for Windows and Macintosh by Sandee Cohen.  I also finished watching the Lynda.com session on Facebook.

Posted by Book Calendar at 9:54 AM