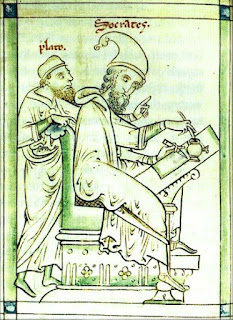 I
A Medieval Picture of Socrates and Plato

Too Big to Know also introduced me to the idea of data science and the data commons where data sets are shared openly.   This adds another layer of change which I am just beginning to understand.  Places like http://data.gov/ where masses of free data sets about the United States are available.  Information is becoming bigger and more complex every single day.

David Weinberger successfully shows why it is so important to be able to filter, categorize, and understand new ways of looking at knowledge without being overwhelmed.  I find myself in a new country of the mind when I look at metadata, linked data, and data sets which can stretch the limits of my understanding.

As always, this is my own opinions.  I also want to include some reflections on other experiences which this event helped bring into focus.  I always try to keep things positive.  If anything needs to be changed please let me know.

I went to a session called The Future of Information which was science fiction writers talking to information professionals about the future of information.  It was based on an idea from similar sessions at the American Library Association.  The session was hosted by the ASIST Sig of Metro New York.  I am currently a member of My Metro as an individual.  The event happened at the New York Hotel Pennsylvania on April 21, 2012 between 2 p.m. and 4 p.m..  The event was hosted by Josh Hadro and Daniela.  I am not perfect with these things.

The authors were David Louis Edelman who wrote the Jump 225 trilogy consisting of Infoquake, Multireal, and Geosynchron.  The second author was Jeff Somers who wrote  The Electric Church and The Digital Plaague.  I purchased Infoquake and Multireal at the session.

David Edelman describes a future where there is near unlimited energy, unlimited computing, and centuries of peace.  His science fiction describes how nanobots have made it possible to live in both a real and a virtual world in the future.

The question which David Edelman tries to answers is if we had a black box which could do anything how would you ask it to do things in the right way.

In contrast Jeff Somers describes how he is suspicious of how technology can solve any problem.  He draws his writings from noire, especially Dorothy Sayers.  The technology is near future and extrapolates on what we have today.  It sounded very much like the new category of science fiction called near future thrillers to me.

I like how Jeff Somers describes how we had the technology of automobiles, television, and airplanes in the 1920s and 1930s but did not fully develop them until the 1970s, 1980s, and 1990s.  People need to be convinced about a technology before they will use it.

The two views contrasted very nicely and made for an excellent and interesting presentation.

Some of the questions asked of the authors were what scares them.

David Edelman described his fear of a loss of privacy and an inability to opt out of computer networks.  Jeff Somers focused on the increasing corporatization of the world where civil law clashes with private corporations, especially mercenary corporations.

Another question which was asked was what gives them hope.

Jeff Somers said that Make magazine and the hacker movement give him hope.  I have only been to one hacker meetup so far, nyhackers.  It was interesting.  David Edelman sees hope in the increasing availability of knowledge, especially Wikipedia.

Jeff Somers gave a very nice pitch for libraries saying that he grew up around libraries.  He also said that the library is more than books to him, it is also curation,organization, and filtering of knowledge.

In my own thoughts, this is the impression which I am getting from talking to other technical people.  Some people see the future of librarianship in content management and information architecture on computers.

There was an open session for questions and answers from the audience.  It was interesting listening.

Josh Hadro said that library school needs to change its perceptions and introduce hacker and maker culture into libraries. I think this is slowly happening.  Metro  New York Library Council  is goiing to have a Makerbot demo on May 23, 2012.
http://metro.org/events/190/

Josh Hadro also quoted Clay Shirky with his famous statement,"It's not information overload. It's filter failure."  This is the Web 2.0 video.  http://vodpod.com/watch/1172451-clay-shirky-its-not-information-overload-its-filter-failure-web-2-0-expo-ny

I especially liked Jeff Somers statement about programming.  He said that it is important to understand prgramming.  Not understanding can leave you at the bottom.  He also said take some time go learn from http://codecademy/ I have to say that the java part of Codecademy is like pulling teeth for me.  I don't mind the CSS and HTML so far.

I have been looking around at various options.  I have an account at Lynda.com http://www.lynda.com/through my work which lets me learn things like Photoshop.  I have also been trying out various places around New York that are startup education oriented.  Codecademy would be considered an educational startup.  So would http://www.skillshare.com/  and http://generalassemb.ly/

I had a chance to mention the book Too Big to Know by David Weinberger.  I enjoyed reading it.  It changed some of my perceptions.

The talk covered all kinds of subjects;  mesh networks, public wi-fi access, privacy and Facebook, and personalization.  I rather liked David Louis Edelman's statement that when you put the word apple in the google search engine you can get Apple bank, Apple computers, or an Apple farmer.

In some ways, I'm not completely fond of personalization.  I rather like search utilities like web ferret
http://www.webferret.com/

I felt like I was a little bit out of my depth.  I was there originally for networking.  It was more of an information session. I did get a chance to get a tinfoil hat which I ended up leaving behind and some candy.  The people were very nice.

This reminds me of how technology companies are increasingly competing with publishers.  If you think of Amazon, it is basically structured like a startup in each of its divisions.  I was also reading about O'reilly media and they announced that they were creating a system called Agile Publishing.  This is a session from the February Tools of Change for Publishing conference.  http://www.toccon.com/toc2012/public/schedule/detail/23005    Why this is important is that Agile software is a form of project management software that is used in startups to plan for growth.   It is just an idea that I find interesting.

Posted by Book Calendar at 6:08 PM

Labels: the future of information, too big to know