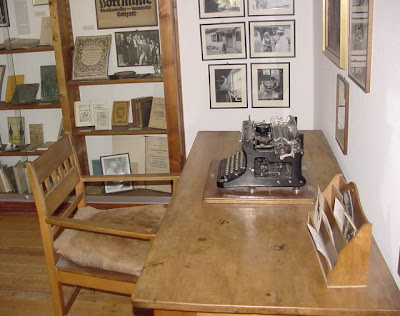 Desk of german author Hermann Hesse in Hermann Hesse Höri Museum in Gaienhofen Creative Commons Attributions Share Alike Attribution 3.0, Photo taken by Dierk Andresen , 2004
Daily Thoughts 3/26/2010
Today has been a quiet day. I have a number of books waiting for me to look at, The Value of Nothing by Raj Patel, How Philosophy Can Save Your Life 10 Ideas That Matter Most by Marietta McCarthy, Gardens of the Sun by Paul McAuley, A Better Pencil Readers Writers and the Digital Revolution by Dennis Baron, The Crucible of Empire by Eric Flint and K.D. Wenthworth, and Other Lands by David Anthony Durham.
We got our first shipment from BWI. There were a few interesting titles including R. Crumb's The Book of Genesis Illustrated, and Agatha Christie's Secret Notebooks edited by John Curran. On the cover it says the book contains two previously unpublished Hercule Poirot stories which is intriguing.
I went around and checked the displays, putting a few new books in a display of folklore books from storage, and making sure the new books were in order. I picked out several books for the book mobile. Mainly, they were biography titles, large print, and popular fiction which many older readers like.

I read the first chapter of How Philosophy Can Change Your Life. It is on the concept of simplicity in life. The author describes how Epictetus believed the simplest pleasures are the lasting pleasures. She draws a parallel between zen and stoicism which both focus on simplifying ones life to the point where the simple pleasures become profound. It is a philosophical counter to excessive materialism. She gives numerous examples at the end of the chapter on how to simplify ones life.

I also started reading Gardens of the Sun by Paul McAuley. It is the sequel to The Quiet War which is about war between two branches of humanity, the outers who are on the moons of Titan and the earth triumvirate led by the Alliance of Greater Brazil.

Posted by Book Calendar at 8:58 AM

Labels: gardens of the sun, how philosophy can change your life, ordering