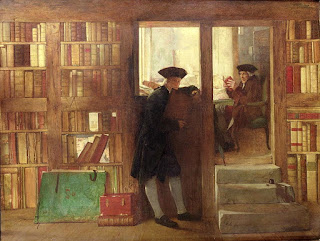 The library is open this Saturday which is the first of the month.  This morning on the way to work, I read some of The Lights in the Tunnel, Automation, Accelerating Technology, and the Economy of the Future.  The author makes some very interesting points.  These are two of them.  The first is that education is not changing as fast as the introduction of new technology.  The way math, science, and engineering is being taught has not been changed that much.  The second point he makes is that outsourcing is often the first step in a longer process where first companies outsource jobs to other countries, and then they ultimately replace many of the jobs with automation.

I checked the Twitter and Facebook accounts for the library this morning.  I also checked the displays and the gift books.  There is a program today called Singin Wid a Sword In Ma' Han an Underground Railroad Love Story which is sponsored by the Friends of the Mount Vernon Public Library at 2:00 p.m. today.
The play was interesting to watch.  The lady had a superb voice.
http://mountvernon.dailyvoice.com/neighbors/mt-vernon-play-depicts-heroes-underground-railroad

There is also an Art Exhibit called Word in the Rotunda Gallery right now which is running from February 15 to March 4, 2013.  It has a nice mix of different types of artwork.

At ALA, Readers First Moves Forward A Notch
http://blogs.publishersweekly.com/blogs/PWxyz/2013/01/31/at-ala-readersfirst-moves-forward-a-notch/

Big Data Startups Getting Ready to Disrupt
http://www.boston.com/business/innovation/blogs/inside-the-hive/2012/12/04/big-data-start-ups-getting-ready-disrupt/Cps15O78kuJFXcLnMN3yYO/blog.html
Posted by Book Calendar at 10:43 AM