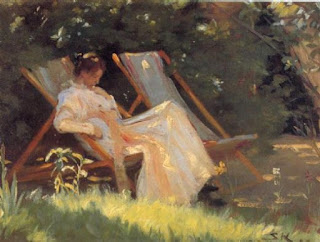 This morning I read some more of How To Create a Mind.  Ray Kurzweil predicts that a computer will pass the Turing test in 2029.  He also describes a number of recent public advances in artificial intelligence like Big Blue beating Gary Kasparov at chess, the Wolfram Alpha answer engine, and the artificial intelligence Watson winning at Jeopardy.

This morning, I checked Facebook and Twitter.  I also checked the displays.  I also spent a few minutes looking at Freading.  There is a graphic novel version of Playback by Raymond Chandler which looks like it is worth reading.

Another article on the budget from the Mount Vernon Inquirer.  It includes discussion of a plan to cut the library to $1.5 million dollars less than half of its current budget.  The budget was definitely put in place.
http://www.mvinquirer.com/2013_spending_plan.htm

I pulled a few more books on tea including a few on the Japanese tea ceremony.  I also spent some time looking at new books.

On the way home, I read some more of How To Create a Mind.  I am reading about Charles Babbage.  I also learned that Von Neumann was the first person to come up with the idea of a technological singularity.  It is very thoughtful material.

What Turned Jaron Lanier Against the Web
http://www.smithsonianmag.com/arts-culture/What-Turned-Jaron-Lanier-Against-the-Web-183832741.html?c=y&story=fullstory
Jaron Lanier always has something interesting to say. I liked reading his book, You Are Not A Gadget, and will probably enjoy The Fate of Power and the Future of Dignity.

Public Libraries as Business Incubators
http://www.pcworld.com/article/197759/Public_Libraries_as_Business_Incubators.html
This is not that far fetched.  We have done work with the African American Chamber of Commerce and the Women's Enterprise Development Center.  We also have a lot of business books and books on starting small business.  In addition, quite a few people use our space as a workspace because of the wireless access.
Posted by Book Calendar at 6:53 AM