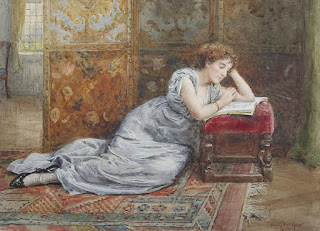 I finished reading Management Rewired this morning.  The book was useful.  It described how we tell stories and create our own world.  These stories drive our decision making.  In order to have positive change we need a better story which leads to a better workplace.  Part of this process of creating a better story and a better workplace is communication which fosters participation and working together.

This morning, I checked the Twitter and Facebook for the library.  I also spent a little bit of time looking at Better World Books.  I also read the latest copy of Publishers Weekly.

I started reading The Visioneers by W. Patrick McCray today.  It was done as an academic writing project. It looks like it is a book that crosses over between academia and popular science which is interesting.  The publisher is Princeton University Press.  There are a number of other libraries in the Westchester Library System which have it.

The computer lab was open from 2:00 p.m. to 4:00 p.m. today.  Among the people at the lab were two people from the computer class on Tuesday night who were practicing Microsoft Word.

I spent some time checking the 800s in the mezzanine today.

I read some more of The Visioneers.  On P.13 W. Patrick McCray describes visioneering as:

Visioneering means developing a broad and comprehensive vision for how the future might be radically changed by technology, doing research and engineering to advance this vision, and promoting one's ideas to the public and policy makers in the hopes of generating attention and perhaps even realization.

I like the material which is written on  Gerard K O'neill, especially the vision of space manufacturing as a way to move pollution and resource depletion off earth as well capture solar power off planet.  It has a very utopian feel to it.

I decided to see if there were some similar books.  Robert Zubrin has a book called The Case for Mars: The Plan To Settle The Red Planet and Why We Must.

As an aside Aeroscraft started testing their hybrid craft which was listed at 500 tons cargo capacity.

I believe that a craft like this could carry a large payload like a rocket to high altitude and be used as part of a manned rockoon.  The Da Vinci Project a Canadian X Prize project was working on this.
http://www.davinciproject.com/about/team_summary.php

WILL act Reintroduced in the House
http://lj.libraryjournal.com/2013/01/legislation/will-act-reintroduced-in-house/
It is precisely this kind of thing which will make libraries better supported.  We have a Job Information Center and a career counselor who come once a week.
Posted by Book Calendar at 7:19 AM