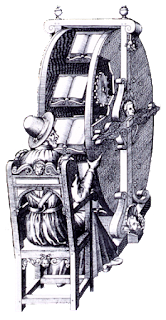 I checked the libraries social media this morning.  I read some more of The Honest Truth About Dishonesty on the train to work.  The author is describing how and why people cheat at golf.

I checked the displays this morning and the gift books.  I have a copy of the New York Times Book Review and the Times Literary Supplement to read.  This is the first time I have seen the New York Times Book Review review book apps.  On P.9 of the January 27, 2013 issue, there is an article titled The Heat of Battle Apps that Explore the Events of the Civil War, World Wars I and II by J.D. Biersdorfer.

I checked out three books today; The Sorcerers and Their Apprentices by Frank, The World Until Yesterday by Jared Diamond, and The One World Schoolhouse by Salman Khan.  I saw a link to the Khan Academy on the local school district site.

I am reading the latest Forecast from Baker and Taylor.  Jessica Alba has a new book, The Honest Life Living Naturally and True to You.  It looks like an endorsement for her new line of natural products, but it will have a lot of star appeal to it.  Also there is a new Marion Zimmer Bradley Darkover novel, Children of Kings.  I am hoping that the writer who is finishing the novel is good.  There is also The Complete Stories of Truman Capote.

There is a new book coming out called Big Data: A Revolution That Will Transform How We Live, Work, and Think by Viktor Schonberger and Kenneth Cukier.  It has a 75,000 print run and is coming out in March.

The computer classes are tonight in the lab.

ALA Midwinter 2013: Next Up, Pew Will Look at Library 'Marketing'
http://www.publishersweekly.com/pw/by-topic/industry-news/trade-shows-events/article/55694-ala-midwinter-2013-next-up-pew-will-look-at-library-marketing.html

Data Scientist: The Sexiest Job of the 21st Century
http://hbr.org/2012/10/data-scientist-the-sexiest-job-of-the-21st-century/ar/2
Posted by Book Calendar at 4:21 AM