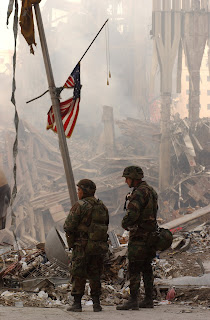 Two United States national guardsmen at the site of the world trade center.

Today is September 11, the day the towers fell in New York. This morning, I cleared off the main display stand and put up various books on 9/11/2001. We have lots of books about actual accounts of September 11 because our library is in New York. Books about firefighters, policemen, and rescue workers who sacrificed a huge amount to clean this city up and make it safe again. Please take a moment to ponder on what happened. It can possibly happen again. Pray that this does not happen again. Vigilance is the price of freedom.

I remember being at the court house in Staten Island waiting to be picked up for jury duty. We were watching the television when it cut off and showed the planes hitting the twin towers. The buses stopped running and I ended up walking for three miles to get home. I believe it happened as it was. No conspiracy theories, no hidden agendas. It was terrorists attacking a symbol of American dreams and aspirations all over the world.

I could stand next to the train station on Staten Island and see the pillar of smoke that was the World Trade Center. It was a long grey line against the sky. I stood and watched it for an hour. Then I went inside and laid down on the bed and stared at the ceiling number for the next three hours.

I took the ferry past the the Statue of Liberty which has since reopened. For a long time the statue was closed. The closure was a deeply sad affair. To close down liberty is immensely symbolic. I had a hard time believing it. It made me very angry.

I remember landing on the Staten Island ferry near the financial district. My lungs burned, my eyes teared, and my skin itched. It was hard to be there. I feel remorse for many of the people who rushed to the center which was necessary. Many will be disabled from the fumes for the rest of their lives. You could see the black shadows on some the buildings where the soot stained the sides of the building.

We had someone who worked at our library who lost a friend in the tower. I am lucky, unlike many others that I did not have a family member working or visiting in the towers. I remember her coming in slightly dazed from shock. She eventually left. Her life seemed to be in tatters.

Yes, we should remember - Nards