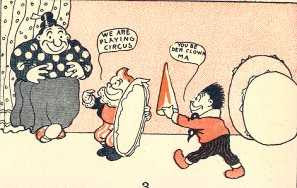 I read some more of This book Contains Graphic Language Comics As Literature by Rocco Versaci. Chapter 4 was about comics as a medium for journalism. My favorite comic book journalist is Joe Sacco who wrote Palestine and Safe Area Gorazde. Chapter 5 is on war comics. It was a a learning experience. I do not know a whole lot on World War II comics. I am vaguely familiar with Fighting Combat, Unknown Soldier, and Sergeant Rock, but not much else. I like my comics to be closer to fantasy than reality a lot of the time.

The final chapter, Chapter 6 is on comics as literature. He talks quite a bit about Classics Illustrated, a comic which I do not like at all. It tends to be poorly done and flat in my opinion. I prefer original works focused on literature. Rocco Versaci does mention Peter Kuper's interpretation of Upton Sinclair's The Jungle and Robert Crumb's Introducing Kafka which is a morosely funny interpretation of Kafka's life.

Shakespeare seems to be the standard which many comics aspire to. Mr. Versaci praises the series of Puffin Graphics Shakespeare comics. Quite frankly, I think the best theater comics are P. Craig Russell's opera adaptations including Bluebeard, The Magic Flute, The Ring of the Nibelung and Parsifal.


Later in the book, he identifies who he considers to be the most literary comic book writers, Alan Moore, Neil Gaiman, and Robert Sikoryak. I have never read Robert Sikoryak, so I really can't comment on him. I would add Marjane Satrapi's Persepolis and Bill Willingham's Fables.

This book taught me quite a bit and it is worth reading if you want to learn about comics as a literary medium.

I spent some time looking through the McGraw Hill Professional books website this morning. I looked through the construction, medical, and engineering books sections. It is a useful website.
http://www.mhprofessional.com/

I think I am going to read Ice Haven by Daniel Clowes on the train home tonight. There is something about Clowes graphic novels which somehow combines absolute nerdiness with absolute coolness.
Posted by Book Calendar at 6:19 AM