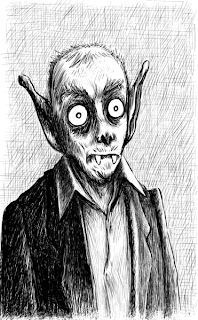 This piece of artwork is free. It is a copyleft licensed image. The author wants to you use it as much as possible. http://artlibre.org/licence/lal/en/

Sunshine by Robin McKinley is an interesting novel. You might call it a lady vampire slayer story for adults. This book is a Mythopoeic award winner. Sunshine is a bakery worker, she bakes muffins, cakes, and wonderful cinnamon buns that to the people who come to her bakery are very magical. She lives a quiet life and the most excitement she has is a boyfriend who rides a motorcycle.

Then one day, she goes to be alone for a little while and makes a mistake. At this point in the novel, she is captured by vampires. We do not know that this world has the supernatural until she is caught. Then darkness is slowly brought into play. I really like how this is done by the author.

Sunshine uses her magical heritage to free a captured vampire who is supposed to dine on her and they escape together. I like that she tells the beauty and the beast story to Constantine, the vampire she is supposed to be a snack for.

Sunshine goes back to her muffin making world. At this point we learn, that the people who are inhabiting her cafe are rather odd. Her boyfriend Mel is covered with rune tattoos and many of the customers are SOF-- Special Other Forces whose job it is is to fight dark forces.

The setting is rather interesting. There has been a war between humanity and the others, vampires, werewolves, and demons. The werewolves and demons partially sided with humanity and the vampires are humanities mortal enemies. Constantine is different than most vampires, he is the vampire archtype you might see in the television show Angel, or the manga, Vampire Hunter D. In mystical terms he would be the hunter or woodsman who survives by drinking the blood of beasts.

I would call this novel a more mature version of Buffy the Vampire Slayer. Sunshine we learn is the embodiment of light, her heritage comes from a wizard father who she knows very little about. She seeks help and gets it from her old landlady a wardskeeper who helps her come into her power. The evil vampire Bo does not leave her alone, he sends a vampire after her but she kills it with a kitchen knife something which is not supposed to happen.

She with the help of Constantine go to battle the Bo who is the embodiment of corruption. Sunshine takes out Bos heart and destroys it in a burst of pure light while Constantine fends off Bo's minions.

The story is very well written. It is not as dark as most vampire novels because the main characters personality and abilities are the embodiment sunlight and positive energy in many ways. Constantine serves to balance out her life with the darker aspect of heroism. He is not evil, because he has chosen to be alone in the darkness and hunt animals.

I also like that not all of the SOF-- Special Other Forces are good guys, some of them want to keep her locked up to study for their own needs. Also, some of the characters are half-other. One of the SOF officers turns blue in private.

There is a librarian character Aimil who helps Sunshine learn a bit about vampires. She is also a half- breed passing as human. When she was little she had an extra set of teeth that were removed. The details in the writing are very well done.

This is a quick, enchanting light read. It is a better more adult version of the lady vampire slayer story. If you like fantasy books this is a good choice to read.

You had me at vampire :)

This sounds like a pretty good read, in fact I am off to check it out on amazon :)

I read this book a few years ago, I agree with the review. It's light and frothy. It also brings out some pretty interesting themes, such xenophobia, fundamentalism, and what it is to be human (from my recall-I could be wrong).

Sunshine is a very good book. It sticks to the traditional vampire in all except Con, but even Con is vampire-y enough for us to know that VAMPIRES ARE BAD. They eat people. They do not glitter.

The setting is a very complex world in which vampires are like bogeymen. You're scared out of your wits of them, but you're not quite sure whether they exist... until they catch you. Then you're dead. But Sunshine escapes.

Right. Good book. Read it. Enjoy. And make sure you have food, or all the delicious stuff mentioned in here will make you drool all over the book. And that's not good for the binding.