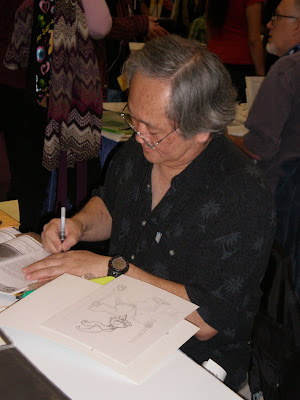 Stan Sakai at WonderCon 2009.28 February 2009(2009-02-28)This file is licensed under the Creative Commons Attribution ShareAlike 3.0 License by Brokensphereon on Wikimedia http://commons.wikimedia.org/wiki/File:Stan_Sakai_at_WonderCon_2009_1.JPG Stan Sakai is the author of Usagi Yojimbo.

Miyamoto Usagi is a ronin, a roaming unaffilitated samurai in this graphic novel. The character is loosely based on Miyamoto Musashi. The setting is a medieval japan populated by mythical creatures and anthropomorphic animals. Miyamoto Usagi is a rabbit. The graphic novel by Stan Sakai has been running for 25 years. This book was specifically produced for the 25th anniversary of the comic. It has won a variety of awards including the Eisner Award, the Inkpot Award, an American Library Association award, and many others. The writing and drawing is very entertaining.

This edition is a standalone edition. The colors are done with watercolors which is not like most American comics. Stan Sakai is from Hawaii. It adds a different feeling to the comic. The lines are also very strong and fluid. This makes the characters well defined. The background is a medieval Japan with some unusual touches, oversize mushrooms, some strange animals, it transports you to a mythical place.

The story takes place on the night of Oborozuki-Yo (the hazy moon) at the same time it is tied with the Yokai (haunts). This gives the author license to introduce ghosts, demons, and spirits from Japanese mythology as well as some of his own fanciful creations. Some of there are silly like the tentacle beast, and some of them are mythological like the fox spirit and the fire breathing salamander.

At the end of the book, there is an interview with Stan Sakai. He details the design, panel layout, writing, and research into Japanese folklore to create the story. He also talks about his work with Sergio Aragones as a letterer for the comic Groo.

This comic was fun to read with plenty of color, action, monsters, and folklore.

I wrote this review while I was sitting in the laundromat. Then I rewrote it a bit while I am sitting at the computer.

I also had time to read a little bit more of In The First Circle. Right now, I am at the point where Stalin is a character in the book. He is rather self important and more than a little deadly in an uncompromising ironhanded way. If Stalin is insulting the other characters, they will live, otherwise if he is quiet, they die. Every couple of chapters the main characters change. This is a very hard thing to do.

Stalin makes several literary references inside the book which is different. He praises the book, Iosif Vissaronovich Stalin: Short Biography and he describes how he made sure that the book portrayed him in a positive light. Later Stalin also praises the book Tito: Traitor In Chief by Renaud de Jourenel one of his rivals.

I watched a bit more of the BBC production of I Claudius. I am up to Chapter 6 which is called Reign of Terror. Tiberius is running the Roman empire with an ironhand and accusing many people of treason. Soon, Caligula will be in power.
Posted by Book Calendar at 6:13 AM