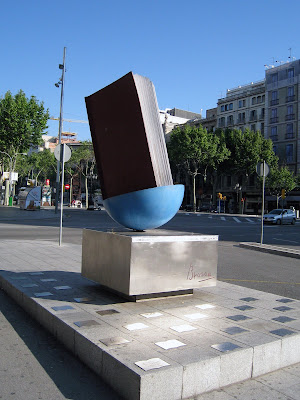 Monument al llibre (“Monument to the book”), sculpture from the year 1994 by Joan Brossa for the Gremi de llibreters de vell de Catalunya (“Guild of second-hand booksellers of Catalonia”) at the crossing Passeig de Gràcia with Gran Vía in Barcelona, Catalonia (Spain). I hereby assert that I am the creator and/or sole owner of the exclusive copyright of Monument al llibre - Joan Brossa - Barcelona.jpg. I agree to publish that work under the free license Creative Commons Attribution ShareAlike 3.0 Unported. 2008-09-13, Till F. Teenck.

Today has been another quiet day. I spent some time reading Library Journal, Publishers Weekly, and Booklist for reviews. I also took some time to look at our back orders. Things are moving along.
We keep a patron requests sheet where we log requests for books, cds, dvds, and other materials which we do not have. It is a simple spreadsheet with author, title, format, and call number. One of my colleauges maintains it. I try and order books from the list as much as possible. Lately we have gotten several requests for christian fiction which is something I am going to have to learn about a little more. We get requests mainly for urban fiction, suspense, African American fiction, mysteries, and popular fiction titles. I saw a number of christian fiction titles being discussed on the http://bookblogs.ning.com/ site.
I have been thinking about the number of requests from homebound people a lot lately as well. They often request popular fiction titles to be sent over via the bookmobile when it visits. Daniel Steel is very popular so are large print African American titles.


I read some more of The Huffington Post Complete Guide to Blogging during lunch. It is mostly concise tips on how to write for blogs; write every single day, try to stick to a single point, use eye catching headlines, include pictures and links in your posts to make them interesting, filter your comments, and people want to see something new every single time they visit a web site. The advice is right on target.

Many old line media types are repackaged for the digital generation and write columns for the Huffington Post; Arthur Schlesinger Jr., Gore Vidal, Larry King, and Erica Jong are a few of them. The blog collective is left leaning and writes very entertaining stories. Arianna Huffington reminds us that content is king and it is still about the story. The second half of the book reads like a cup of hot ramen, hot, quick, and tasty with very little nutritional value.

Posted by Book Calendar at 4:24 AM

Greetings from Catalonia. That first half of the Guide looks very interesting, I'd like to see it published in my country.