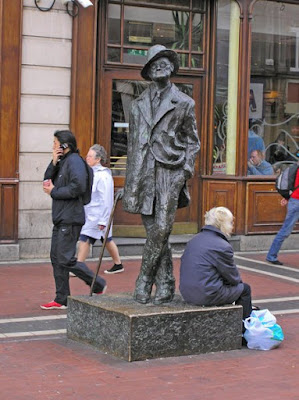 A statue of James Joyce in Dublin, Ireland.

I am going to the Museum of Comic and Cartoon Art festival tomorrow. Hopefully, I will get to see one of the panels, AH, HUMBUG! Arnold Roth and Al Jaffee in conversation with Gary Groth from 3:00-3:50 p.m.

I dropped off my my library books at my library. I drove up there. It is raining outside. Then I drove down to Barnes and Noble at the mall. I took a look at In The Stormy Red Sky by David Drake. The hardcover is $25.00 at the bookstore. The cover art is very nice. I could go to the Strand Bookstore and buy it there if they have it for $12.50 if there are any extra reviewers copies. The author is popular enough that there often are not any, or I could buy it as an E-ARC from Baen for $15.00, or if I am a little bit more patient, I could wait for it and order it from my library. I have never bought an E-Arc from Baen.

I watched Steamboy this afternoon on dvd. It is by the director of Akira, Katsuhiro Otomo. The story is interesting. It is about a conflict between Britain and a mad inventor who makes various clockwork steam mechanisms.

The main character is Ray Steam, a young inventor whose father has invented a new form of energy in the form of a high pressure steam ball. The story is quite fanciful. There are armored steam powered knights, railroads, steam cars, dirigibles with giant claws, a steam powered floating fortress, and other mad inventions. There are plenty of fantastic explosions and London nearly gets destroyed. There is a back story of science going out of control. You might call this film steampunk.

It definitely has the feeling of Victorian science fiction. The settings are interesting, Russian Alaska, the english countryside, and London during the 1860s. There is lots of fighting and action. The anime has a lot of detail to it. The characters unlike most anime are not big eyed people from a non-descript setting, they look European.

The main problem with Steamboy was that the characters were rather shallow and predictable even for anime. The villains look like the set piece villains you might see in an old film. The characters seemed to be a background piece for the the inventions and the battles. The dialog was very predictable, but it fit well with the action sequences. Not everyone will like this.

The anime took ten years to make. The drawings are very detailed. The mechanics of the world work quite well. I would say this film is as good as Akira the directors other film which is considered a classic in anime. I could drift right into the action without thinking too hard. If you like cartoons or anime this film is worth watching. It is pure escapist fluff. If you like manga, Akira is considered to be an excellent manga comic.