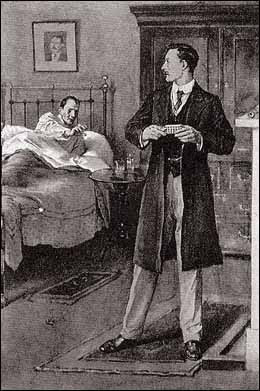 Sherlock Holmes in "The Adventure of the Dying Detective"

This is a military science fiction novel. An executive protection service has to protect an interim president during a planetary civil war. This is an action novel with lots of explosions, shooting, and narrow escapes. The point of the novel is the action.

Thus follows a series of daring escapes, hijackings, and intrigue. The good guys do not win in the end, but they do save their man.

The setting is the near future where earth has just begun colonizing the outer planets. The weapons are recognizable as things which we have today, machine guns, mortars, bombs, and explosives. The locals are decidedly low tech, coming from a back water world. The United Nations is still in existence and has sent peacekeepers and bureaucrats to keep things under control.

Plenty of action and lots of things get blown up. Plus, if you have a libertarian bent and don't like bureaucracy, you might like the politics in the novel. I read it for the action.

I have started reading a book called Shutter Island by Dennis Lehane. It is a thriller featuring two U.S. Marshalls who are visiting a prison for the criminally insane on an island. One of the inmates has escaped. The book is being turned into a movie starring Leonardo Di Caprio coming out in 2010.
Posted by Book Calendar at 9:09 AM

Sounds like a perfect book for that lazy day when you don't want to ponder your reading to heavily. I will have to get it.

Michael Z. Williamson is an interesting writer. He takes what a libertarian right society would be like to its full length. He has two other novels, Freehold and The Weapon. The Weapon might be seen as a bit extreme, it is guerrilla warfare against earth by a special agent from a newly settled planet.

They are interesting to read.