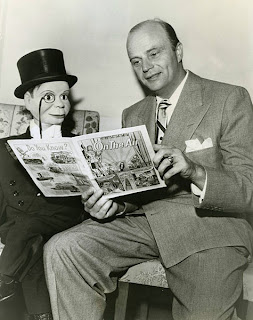 Photo of Edgar Bergen and Charlie McCarthy from NBC Radio. They are reading an NBC-produced comic book, On the Air, which told the story of what happens behind the scenes in radio broadcasts in a children's format. Press Release October 8, 1947, Public Domain.

I am planning on going to a New York Librarians Meetup.  I have been extremely busy lately.  This one is for Literary Brooklyn at the Princeton Club of New York on Tuesday, February 21, 2012 at 6:00 p.m..  I rsvpd and will have to dress the part. Evan Hughes will be discussing his debut book Literary Brooklyn: The Writers of Brooklyn and the Story of American City Life.  It should be a nice chance to meet with colleagues and hear an author talk.

I spent some more time reading Thinking, Fast and Slow.  The author is writing about pattern recognition or the human tendency to seek after patterns even where there are none.

I also took a break from reading and watched Shaun of the Sheep which is humorous claymation.  It is by Aardman who does Wallace and Gromit.  I also watched Wallace and Gromit A Matter of Loaf and Death which has a nice sense of humor to it.

Posted by Book Calendar at 6:23 AM