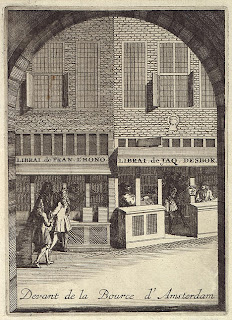 Engraving of a Huguenot bookstore in Amsterdam, 1715

I went to Barnes and Nobles today and looked at the science fiction and comic books.  A few books that caught my eye were American Vampire by Stephen King and Scott Snyder which is a graphic novel and Spade and Archer The Prequel to Dashiell Hammett's Maltese Falcon by Joe Gores.  They were showing Neil Gaiman's American Gods which is being optioned for television as well as George R.R. Martin's A Game of Thrones which is currently a television series.  I am looking forward to the release of the final book in the series soon.  T

here were a few things which my library system didn't have which I want to read, Fables: Cinderella and Fables: Rose Red which are both graphic novels and two science fiction paperbacks, Embeded by Dan Abnett and Alien in the Family by Gini Koch.  The other book which I am looking forward to my library system getting is The Crippled God by Steven Erikson.

I have been reading some more of Getting More. The author is writing about how to use standards and written agreements to get what you want.  He is talking about how not to be accusatory and at the same time getting people to follow up on agreements.

This evening, I finished reading Getting More.  It is very much an incremental process which the Stuart Diamond is describing.  It is about finding out what people want and then exchanging things of unequal value.
Posted by Book Calendar at 1:33 PM