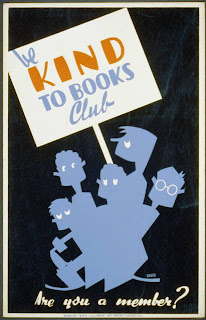 Be kind to books club Are you a member? /
Poster showing a group of children with their book club banner.
Date Created/Published: Chicago, Ill. : WPA Illinois Art Project, [between 1936 and 1940]

It is interesting reading The Earth Shakers.  At this point in my reading, Harold Lamb is describing the Mongol invasion of Russia.  There a lot of quotes and individual stories of survival peppered throughout the account.  Genghis Khan has passed away and his spirit is supposed to reside in the mongol banner.

This morning, I checked the donations, made sure the Twitter account was updated, put in the surveys, and made sure the displays were in order.

We had three bike racks donated to the library from Habitat For Humanity today for Earth Week which is from April 25 to April 30.  They are going to do some landscaping on the building this week to make it a little prettier.

I also met to discuss some use of the computer lab.  Things might change a bit.

I put 63 documents the government doesn't want you to read by Jesse Ventura on hold.  It is #7 on the New York Times Nonfiction Bestseller list.  There were several New York Times book reviews which I read during my dinner hour.

I also noticed that there is new A. Lee Martinez novel out Chasing The Moon.  I like his humorous fantasy novels.

Posted by Book Calendar at 6:30 AM