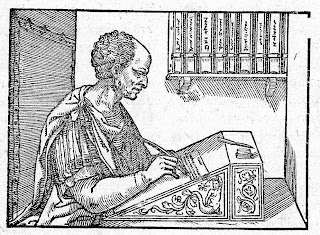 Woodcut showing Cicero writing his letters. This image is a detail from page 329 of Cicero, Epistulae ad familiares (“Letters to his friends”), from an early edition printed by Hieronymus Scotus (alias Girolamo Scoto) in 1547 at Venice (Venezia, Italy). On this page, book IX (nine) of the Epistulae begins.

The trainer from Sony came in to show the staff how to use the Sony reader devices.  It was interesting.  We spent some time going over Overdrive which is our provider of ebooks as well as the features of the Sony device like e-ink display technology.  We have to set up some of our terminals so we can download books onto the Sony reader which are free like the free books from Harlequin, the Baen Free Library, a few creative commons titles, and other books.  This should supplment our already large selection of books.  Overdrive is partnered with Project Gutenberg and has over 10,000 titles added from their collection of ebooks to Overdrive.  Our library is one of the 30 libraries which received the Sony grant for ereaders.

I checked the displays, updated the Twitter account, and checked on the surveys.  We did not get any surveys so far today.  It is slowing down a bit.  I think we have some excellent information to work with from the surveys.

The book, Powering The Dream The History and Promise of Green Technology by Alexis Madrigal came in for me to read.  I also read Richard Stark's Parker The Outfit Adapted and Illustrated by Darwyn Cooke on the train to work this morning.  It is a high octane mix of thievery, violence, and crime.  The story is very hard boiled noire with heists, getaways, and gun play.  It was a lot of fun to read.  The story was very fast paced.

I also called Janway http://www.janway.com/ to ask about a variety of products which would have our library logo printed on them.  Things like pens, mugs, flash drives, and bookmarks.

I am looking at the program for the Westchester Library Annual Conference on May 13, 2011.  The keynote speaker is Seth Godin.  I am interested in going to a few of the sessions,  Up To The Challenge: Libraries Successfully Serving Job Seekers led by Rebecca Mazin, and The Pleasures and Pitfalls of Book Discussions led by Barbara Wenglin.

On the weekend I finished reading The Wise Man's Fear by Patrick Rothfuss and The Executioness by Paolo Bacigalupi.  I have several piles of books that I have to get around to reviewing.

On the train home I read some of Powering The Dream.  It sparks the imagination of what might have been.  The author describes wave energy machines being investigated in 1906, pneumatic tubes used to send mail throughout Paris in 1909, and windmills on the prairies of the United States during the 1870s.

I also finished reading the first story in the book Metatropolis.  It is called In The Forests of the Night by Jay Lake.  The main character is named Tygre Tygre.  It is about a future green city.

I sometimes wonder what people are thinking.  Volunteers generally do not do the same kind of job as paid workers.
Posted by Book Calendar at 10:23 AM

I Love this book very much!