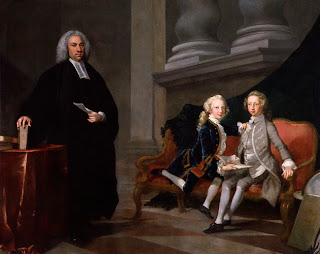 The future George III of the United Kingdom (right), pictured with his brother Prince Edward, Duke of York and Albany, and their tutor, Francis Ayscough, Dean of Bristol. The Prince of Wales sits regally, as befits the heir to the throne. Near his left hand is a globe and a volume bearing his crest, the Prince of Wales feathers. His brother symbolically serves him by offering him a book (albeit in a playful and distracted manner). Richard Wilson, circa 1749

I finished the first part of The Earthshakers this morning.  This first half was originally titled The March of the Barbarians.  The ending describes the fall of the Mongols.  It was quite interesting.  The Mongols attacked Japan and were thoroughly routed.  They also attempted to invade Vietnam and won the battle in the cities, but ended up fairing poorly on horseback in the jungle.  I am starting on the second part, Tamerlane.

Today has been another quiet day.  I updated the Twitter account, checked the displays, checked the gift books, and turned in my monthly statistics for programs, email reference, and now Twitter.  I have to work on the bimonthly report.  I also spent some time on getting ready for future programs.  Things like a mortgage workshop for seniors, and adding a few more open hours to the computer lab.

We did a few minor things to the web site like an adding a search inside the site box.