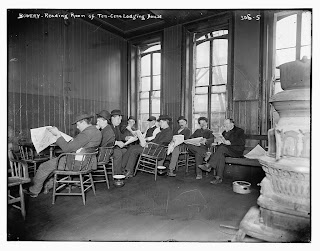 This morning, I checked the displays, updated the Twitter account, and added one more survey.  The amount of surveys we are getting is slowing down.  I think most people took them during the first month.  Towards the end of the day, I added a few more surveys.

We had our annual harassment workshop with the city human resources department today. It was better than last year. The films were watchable.


I also found an interesting review of a title, Payback: Why We Retaliate, Redirect Aggression, and Take  Revenge in the April 1, 2011 Library Journal.

Museum of Comic and Cartoon Art New York Festival is on April 9 and 10
http://www.moccany.org/content/mocca-festival  It is very inexpensive $12 for two days.  I enjoy it because it is mostly independent comics.

This evening, I went to Swann Gallery showing of books.  It is something that is going to take me time to write up.  It was an incredible experience.  I got to see and hold early books with Arthur Rackham illustrations, Walter Crane illustrations, and see original works by La Fontaine.  The selection was stunning.  The Walter Crane illustrations were for a version of the Faerie Queen.  This was a superb set of books to see.  Many were illuminated manuscripts and incunablia.

On the way home, I finished reading Metatropolis edited by John Scalzi.  The stories mostly focused on future green cities.  The most prominent city was Cascadiopolis, a future city built around the Portland Oregon area.  The last story, To Hie From Far Cilenia by Karl Schroeder was about a virtual city created on the internet which interacted in a very real way with the every day world.

Data.gov in crisis: the open data movement is bigger than just one site
http://www.guardian.co.uk/news/datablog/2011/apr/05/data-gov-crisis-obama
This is important because it is a followup to a possible shut down of the Statistical Abstracts being threatened.  It seems that we may be a facing a direct attack against open government. http://www.libraryjournal.com/lj/home/889924-264/statistical_abstract_faces_an_untimely.html.csp
Posted by Book Calendar at 9:45 AM