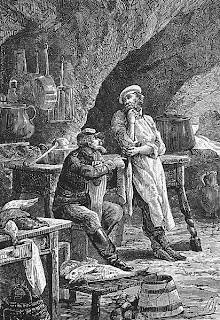 An illustration from Jules Verne's novel "Off on a Comet" (French: "Hector Servadac", 1877) drawn by Paul Dominique Philippoteaux.

This morning, I checked the library Twitter and Facebook accounts.  I also read some more of Fire With Fire on the way to work.  I rather like that the authors describes diplomacy with aliens, not just outright war.  It makes the story very interesting.

I checked the displays and spent more time weeding and shifting in the 900s today.  I try and be consistent.  I also spent a bit of time putting together an order of books on business plans.  Tomorrow, I am going to be using the digital camera to take a few pictures around the library.

I finished reading Fire with Fire by Charles E. Gannon.  The main character, Caine is the classic man out of time.  He is woken out of cold sleep to perform missions for a secret organization.  It makes for an interesting character because he is anomalous without connections to the present.

The book, Mission to Mars My Vision for Space Exploration by Buzz Aldrin has come in for me to read. Buzz Aldrin is best known for the Apollo 11 moonwalk.

On the way home, I read some of Mission to Mars.  Buzz Aldrin describes a spaceship that would permanently cycle between the Moon and Mars taking on and off cargo and passengers.

What Can Libraries Do To Survive in the Digital Age?
http://onpoint.wbur.org/2013/05/07/future-of-libraries
Posted by Book Calendar at 5:09 AM