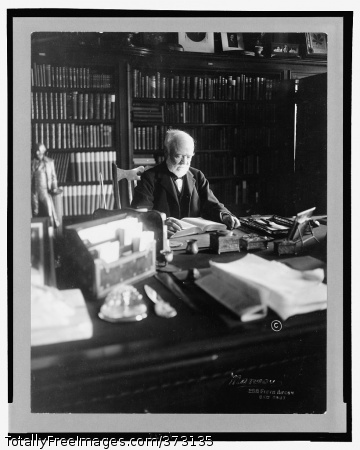 Andrew Carnegie, half length, seated behind desk, looking at a book, facing right, Shelves filled with books in background, c1913

I read some more of Rise of the Robots on the way to work.  There is a reminder that robots aren't consumers.  When you replace a human with a robot or algorithm, that human is less able to buy things.

I spent some time looking through the psychology books.

I also spent some time thinking about the long range plan and the survey.  I did a little work with Constant Contact.

I finished reading Rise of the Robots Technology and the Threat of a Jobless Future by Martin Ford.   Martin Ford discusses the possibility of a singularity where machines become smarter than humans.  To me this is unconvincing, we have no idea what machines would be like if they were smarter than people.   He also suggests the idea of a guaranteed minimum income which would go into place because there would be no way to support the majority of the population with jobs.  There is a claim that this is better than an expanded welfare state.  My view is that people really don't know what to do if robots took over most jobs.  It would be unprecedented.

Attention White Collar Workers The Robots are Coming For Your Jobs
http://www.npr.org/sections/alltechconsidered/2015/05/18/407648886/attention-white-collar-workers-the-robots-are-coming-for-your-jobs


A bit on the book, Rise of the Robots

First Lady: Libraries, Museums, are 'Necessities' Not Extras
http://www.nytimes.com/aponline/2015/05/18/us/politics/ap-us-michelle-obama-libraries.html?smid=fb-share&_r=0
Posted by Book Calendar at 3:29 AM