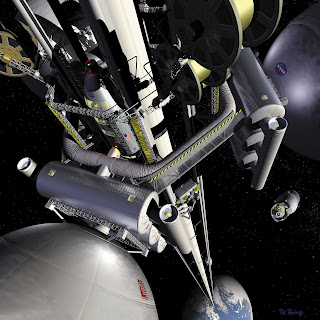 I am enjoying reading Physics of the Impossible; it is in the same vein as the Physics of Star Trek by Lawrence M. Krauss and Stephen Hawking, or The Singularity Is Near When Humans Transcend Biology by Ray Kurzweil. There is an exuberant silliness to these kind of books. They speculate at the edge of reason.

We might say these are the kind of books that inspire people like JP Aerospace to attempt to build Airships to Orbit http://www.jpaerospace.com/ , or convince people that one day Cloud Nine tensegrity spheres designed by R. Buckminster Fuller will actually fly.

Maybe, we will see Robert Anton Wilson's R.I.C.H. economy take flight http://www.deepleafproductions.com/wilsonlibrary/texts/raw-RICH.html in some whimsical future where people are wonderfully altruistic. I really enjoyed Robert Anton Wilson's Illuminatus Trilogy by the way if you are looking for a mind bending bit of science fiction, this certainly does the trick.

I rather like popular science titles in this vein. They encourage me to look at the edges of things and see other possible futures than the one which we have now. The Third Wave by Alvin Toffler is certainly entertaining but it probably will never come true in the way he describes it.

There are many missed opportunities and possibilities. A book which many people should read is Technics and Civilization by Lewis Mumford. It is a cultural history of technology and posits a very different more positive future than the one we have now. Technology is very much a choice. I don't agree with some of his leftist views, but I do agree that we could use technology in a very different way to create a much better future.

I am also a fan of R. Buckminster Fuller, creator of the geodesic dome, original thinker, and some would say extreme eccentric. I have read several of his works. One of his most famous is Operating Manual For A Spaceship Earth http://reactor-core.org/operating-manual-for-spaceship-earth.html

Right now, I am pontificating a little bit. Everyone has their utopian dreams. People dream of cities in the sky, giant floating cities, and many other no places. Most are complete failures. Some are viewed as successes only in the artistic sense. I can imagine a future where arcologies dot the oceans; but, I think it will never come to pass. Maybe one day while I am looking out at the ocean, I will see something like Shimizu Megapyramid floating in the harbor of New York
http://en.wikipedia.org/wiki/Shimizu_Mega-City_Pyramid
Reading this material is the same reason I like to read Popular Science and Popular Mechanics. I really like green technology and clean technology. I do not see them as a step backward, but a step forward. The idea of a "technic civilization" as Lewis Mumford calls it, a civilization powered by wind, sun, and water on a human scale is doable. Maybe, I am drawing from an impossible dream. R. Buckminster Fuller also saw a future powered by wind and solar power.
I like to speculate about a green future; one not backward, but forward looking and eternal, a place in my minds eye where I can see a green and eternal city floating in a clear sky far in the future. There is more hope for this than most people know.
___________________________________________________________________
The Interconnections Report from the Institute of Museums and Library Studies has a very nice positive report. It says that libraries are the most trusted source of public information, that if you are likely to use the internet, you are very likely to use the public library. This is the first good sign for the profession of museums and libraries, I have seen in a long time.
In person visits seeking information seem to be the most trusted source of information. Remote users do not trust their searches as much and much prefer to come in, in person to get what they dneed.
http://interconnectionsreport.org/.
__________________________________________________________________
I was looking at http://www.kimbooktu.com/ , one of my favorite book blogs and found an interesting tool. Apparently you can get your own free book cover made of your site.
Here it is:
http://www.oreillymaker.com/link/14826/book-calendar/
Posted by Book Calendar at 6:17 AM

Even though most of the grand visions of the future will fail. Some of us must try.

Thanks for coming by. I am a big fan of JP Aerospace. It is really fascinating.