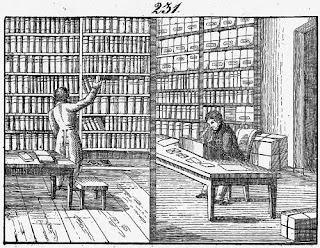 I haven't been doing a huge amount lately. I cut up scrap paper into small pieces for patrons to take notes on and picked up some reserve slips for people calling in to make reserves for items to be held at the front desk. It has been a quiet day so far.

On the train in I read a little bit more of Victory Conditions by Elizabeth Moon. So far, it has been light entertaining space opera with a military touch. I rather like Elizabeth Moon's writing because she has had some military experience as a United States marine and is definitely interested enough in her subject.

Having read a whole bunch of books on grammar and writing recently has changed my reading experience. Now, some books seem much less well put together; others seem to be much better crafted. Reading about writing changes the readers experience.

Sometimes small things of interest pop up in the regular news. Apparently, a Finnish person returned their library book 100 years later anonymously. It is a nice light article. This seems to happen occassionally. People sometimes return their grandparents books which they had laying around the house.

I have been getting various emails from New York Comic Con updating me about what is happening at the convention. If you are a librarian in New York, you can register to attend the conference for free as a professional. I am going on April 18. They had panels on manga, anime, and comics librarianship which were going to the last time I was there. They have been sending me various free movie offers for forthcoming films which are interesting. Unfortunately, I don't have time to go to the films. I saw a really interesting article in Library Journal online. Neil Gaiman is doing an evening to support the Comic Book Legal Defense Fund.

http://www.libraryjournal.com/article/CA6540270.html?desc=topstory
I took some time to read a little bit of professional literature. I went through my stack of four publishers weekly. The March 10, 2008 Publishers Weekly is especially interesting. It is a green publishing issue. On Pp. 26-32 there is an article called Toward A Greener Future by Jim Milliott. I found it very interesting. Some of the initiatives including e-galleys, and giving editors ebook readers to limit paper use sounded effective. There is also a push to use more recycled paper in books. For example, Random House intends to use 30% recycled paper by 2010.
The sponsor of these changes is an organization called the Green Press Initiative; http://www.greenpressinitiative.org/ I think this is a step forward. I saw, no surprise, Gary Hirshberg, advertising his book Stirring It Up, which I reviewed earlier in the March 10,2008 issue of Publishers Weekly.
Posted by Book Calendar at 10:24 AM

Hey wehireu, enjoyed the almost whimsical way you post :) Also made me want to hunt around to see if I owe the library any back books lol!