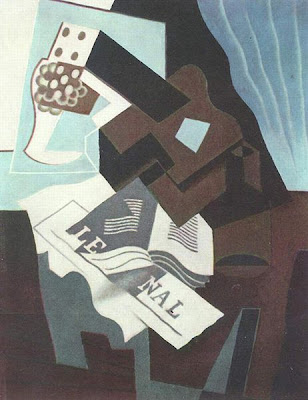 Juan Gris c1919 Stilleben mit Gitarre, Buch und Zeitung. it is abstract figure it out for yourself. I like it.

This morning, I sat in the diner drinking coffee and reading the paper. Nothing was particularly striking in the news. It was relaxing to watch people go by the window. It was raining outside so the diner had a comfortable warm feeling to it.

I have the day off because I am working this Saturday. I am going on a road trip tomorrow. I had my car washed this morning after I went to the diner. Then I went back to the Barnes and Noble in my neighborhood and spent some time looking at computer books. Digital photography is considered to be part of the computer books. I am not sure which cameras are the ones I should order books on. I also have to order books on digital video. I'll have to figure this one out. I put some books down to order on a list.

I'm back home now sitting at my computer. I have been doing the exercises from the Yoga RX book every morning. They are very relaxing. I feel a little less wound up than usual. I am one of those people that likes to be constantly doing things.

I finished reading The Media Savvy Leader. I will probably let it sit in my head for a day or two before I start writing my full review. I like to put things down for a bit before I write the full review.
I read The Ginger Star by Leigh Brackett. It is classic science fiction from the 1940's featuring Eric John Stark who is a combination of wild man and adventurer. Remember "beware the dark man of prophecy." Leigh Brackett is a very interesting writer. She has many movie scripts to her credit. This is a nice little summary of her life. http://www.kirjasto.sci.fi/brackett.htm
I finally recieved a copy of Iron Man on dvd from the library. I had been waiting for it for about two months. The film is solidly pleasing. Nothing spectacular, but still very entertaining. It is of course a retelling of the creation of Iron Man for a more modern audience. The film and special effects were interesting to watch. I like that Iron Man was recreated in Afghanistan.
They also included some interesting things from the comic. They properly portrayed Tony Stark as an alcoholic which he is in the comic. I also liked the cameo where Robert Downey Jr. who plays Tony Stark says "Is that you Hugh Hefner?" to Stan Lee the creator of many comic books. Stan Lee is known for creating Spider Man, X-men and many comic book characters. If you watch the marvel films closely, Stan Lee is in many of them with cameo appearances.
I read the mass market novelization of the film done by Peter David. It pretty much follows the film closely. Peter David is one of the better comic book writers.
I also liked the trailer which was include on the dvd for the movie The Incredible Hulk. Apparently Tony Stark makes a brief appearance in the Incredible Hulk.
There is a rumor that there is going to be an Avengers film. This would include a variety of characters. In order prequel this, they might have to cross pollinate some of the films which are coming out with characters from all over the "Marvel Universe."
Watching superhero films is kind of nostalgic and immature. I rather like going back to my childhood sometimes. It makes you remember when you were little reading comic books, or swapping them with your friends.
I ordered a couple of the large collected works, The Essential Iron Man, Volume 1 for our library. It was $16.99 for 512 pages of comics. The Essential series are very long 500 plus pages each. They cover all the old marvel superheros series. There are other series like this in both comics and manga. DC has a similar series called Showcase Presents which compiles major superheros into large trade paperbacks of 500 plus pages which are not that expensive.
Darkhorse has Omnibus editions of Aliens and Predator that are in full color. They are about 400 pages each and cost about $24.95. I think they also have Star Wars Omnibus Edition.
There are also some manga collected works. Fruits Basket has "Ultimate Editions" which combine three manga into one volume in hardcover for a reduced price from buying the manga separately. Battle Royale also has "Ultimate Editions."
One of the reasons I like buying these things for libraries rather than smaller editions is that they are bigger and a little heavier. They are easier to shelve and not as flimsy as many of the thinner comics. The collected editions in paperback are also usually a little cheaper.
I read some of The Graveyard Book by Neil Gaiman. Neil Gaiman has a wonderfully fantastic imagination. This book is for young adults, but it is reachable for all audiences. It is a fantasy about a little boy raised by the denizens of the graveyard. There is a kind of magical, otherworldly quality to the writing. Dave McKean illustrates the book.
Posted by Book Calendar at 8:23 AM

Thanks for stopping by.

I love that painting