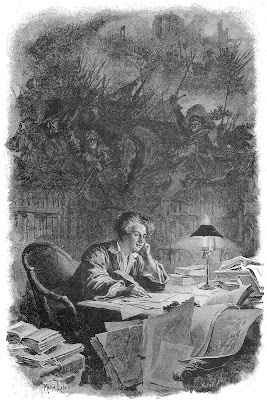 Alexandre Dumas in his Library.

Today has been a quiet steady day. I checked on the displays and made sure more new books were put out. I also checked on the progress of the shifting projects.

This morning I did some ordering of books and read Library Journal online. While I was ordering I noticed Bryan Talbot has a new graphic novel called Grantville. It got a starred review in Publishers Weekly. Bryan Talbot's art is truly fantastic. He is best known for his ground level comic, The Adventures of Luther Arkwright which is a kind of alternate history adventure which mixes spying, conspiracy, psychic powers, and very interesting alternative artwork.

I have a book which came in for me to read, Smart Networking Attract A Following In Person And Online by Liz Lynch. Also, I picked out another book which is nonfiction, Dear Undercover Economist Priceless Advice on Money, Work, Sex, Kids, and Life's Other Challenges by Time Harford. Tim Harford writes for the Financial Times. It seems to be in the same vein as Freakonomics which was a bestselling economics title.

In April 2010, Tobias Buckell is releasing a short story collection, Tides From New Worlds. It should be quite interesting. Tobias Buckell uses Caribbean themes in his science fiction writing.

Tonight, I watched a bit of Pinocchio on video tape. It is the first time I have seen it. I rather liked the When You Wish Upon A Star Sequence. Some people consider it to be the best animated film ever made. This is probably true for childrens films. I am not so sure for more teenage or adult oriented animation. It was quite hard to find this. I could not get it on dvd. Disney tends to release their films irregularly. It is often hard to predict when a particular Disney film will become available.