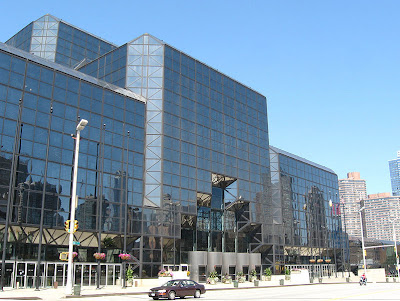 The Jacob Javits Convention Center in Manhattan where I am going today for Web 2.0 with my free Expo Hall pass. This is also where Book Expo America is held. The building is immense inside. The image is from Wikimedia.

Daily Thoughts 11/18/2009
If you want to see what sites are following a particular website, Yahoo Site Explorer is an excellent tool. I occassionally check this to see who is following my site. http://siteexplorer.search.yahoo.com/

I looked today and I want to mention two sites that had a nice feel to them. http://cromely.blogspot.com/ and http://www.literarynobody.blogspot.com/
On the way to Metro I stopped off at Forbidden Planet and looked at some titles. My favorite was Sense and Sensibility and Sea Monsters, the new Mashup book based on Jane Austen. I also liked Your Hate Mail Will Be Graded a set of essays by John Scalzi.

http://www.youtube.com/watch?v=ddO9idmax0o A link to Twitter In Plain English a video shown in the class from Common Craft.
The class on Twitter for Libraries was quite interesting. It was very different than a personal twitter account. They want everything to be very focused and very clean. Library accounts should not have any excess spam: people who are there for only their personal goals.

I learned how to use hash tags, something which I always had a little bit of problem with before. Two of the hashtags they suggested were #followfridays and #followalibrarian as well as Internet Librarian 2009 #IL2009 . It was very educational. One of the websites which allows you to search for tags is http://www.tagdef.com

They are going to send us a link with all the resources that were mentioned in the class. The class ran for three hours at the Metro Library Consortium in New York. The speakers were both excellent. They covered a lot of different material including retweeting, hash tags, searching twitter, setting up twitter accounts for libraries, url shorteners, 140 character novels, and other subjects.

After I went to Twitter for Libraries, I stopped by Time Machine Memorabilia, Comics, and Collectibles and asked if they could order a copy of Bryan Talbot, Grantville. I think this will be something which I want to own.

After I was done having lunch, I went to the Web 2.0 Conference at the Jacob Javits Center. It was mostly internet companies with a lot of internet service providers. There was not much that was especially focused on libraries. Still, I learned a few things.

O'Reilly Media is increasing the number of galleys they plan on putting up on http://www.netgalley.com . I like the O'Reilly computer books. I think they are very high quality.

I was surprised at the number of Australian companies that were at the Web 2.0 Conference. They had a lot of people there.

My most interesting conversation was with Richard Chan, a Product Manager from Microsoft's Bing. They have a new real time Twitter search function which is part of Bing, http://www.bing.com/twitter . It has a number of interesting features including the ability to search photographs which are related to Twitter as well as aggregate links about a certain subject.

I walked around and picked up some literature as well. I have not had a chance to read through all of it and fully look at it yet.

On the way home, I read some of Smart Networking Attract A Following In Person and Online by Liz Lynch. There is a url associated with the book. http://www.smartnetworking.com
Posted by Book Calendar at 3:32 AM

Thank you so much for the mention and taking the time to visit my blog. Very much appreciated :)

I’d like to invite you to write about your favorite books at www.bookdrum.com, where you can add information, images, video, music and links to illustrate and explore the books.

Right now, we're running a $3,000 Tournament and we'll be offering contract work to the best entries.

Hookah Shisha Huka Accessories Charcoal said...
This comment has been removed by a blog administrator.
November 19, 2009 at 12:52 AM