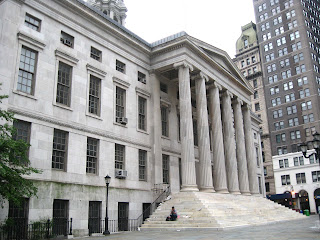 Looking west along north facade of en:Brooklyn Borough Hall at dusk of a cloudy June 15, 2008, Public Domain http://commons.wikimedia.org/wiki/File:Brooklyn_Boro_Hall_dusk_jen.JPG  The publishers tents for the Brooklyn Book Festival were outside Borough Hall.

This morning, I went to the Brooklyn Book Festival Librarian's Breakfast at the Brooklyn Historical Society Library from ten o'clock in the morning to twelve noon.  It is a very beautiful library with polished exposed ornate woodwork.  None of the woodwork is painted which makes it even more beautiful.  The library itself is a research library with no lending. It is extremely clean and well organized.

Unfortunately, the main speaker, Marilyn Johnson was unable to attend due to illness.  Still, it was an enjoyable morning.  There was a group called the Quotables who read out loud quotes from different authors: we were supposed to guess the quotes.  They read quotes by Jack Kerouac, Truman Capote, Edwidge Danticat, Walt Whitman, and others.  I won a poster by guessing a quote.  It is on my kitchen wall now.   There were several people that I recognized from the New York Librarians Meetup  http://www.meetup.com/nylibrarians/  and Barbara Genco who is doing the Facebook page for the ebooks Libraries @ the Tipping Point Summit http://www.facebook.com/pages/LJSLJ-Ebook-Summit/128650870500572


There were two librarians from Westchester.  One worked for Backstage Library Works http://www.bslw.com/ , and another worked as a school media specialist.  There were also quite a few librarians from Queens,  New York.  They served coffee, bagels, and mufins for breakfast.

It was a pleasant way to spend a morning talking about libraries.  Some of the topics that came up were, professional development.  Metro New York was mentioned http://bit.ly/aVcMkS well as the ALA
online courses http://bit.ly/cL3YVk .  Another conversation was about advocacy.  Turning the Page Online is well worth taking if you are interested in advocacy.  http://bit.ly/atGdEz

The breakfast was sponsored by Target which has an educational grant for libraries http://www.target.com/grants

After visiting the Brooklyn Historical Society Library, I went outside into the light rain.  There were lots of tents with publishers at the book festival.  Some of the publishers which I recognized were Akashic Books, Two Dollar Radio, Small Beer Press, Granta, Verso, Graywolf Press, Black Lawrence Press, Drawn and Quarterly, and Dorling Kindersley. It had a very indie feel to it.

Small Beer Press has a site which sells ebooks called Weightless Books http://weightlessbooks.com/ I like Small Beer because they produce fantasy books which are "slightly weird" and not overwhelming.   They have an excellent roster of quality fantasy wrters; Kelly Link, Karen J. Fowler, Poppy Z. Brite, Kathe Koja, Carol Emshwiller,  and John Crowley are just a few of them.

Another press which caught my attention was Purgatory Pie Press.  They make books on making books and paper toys.  I especially liked the book Magic Books and Paper Toys by Esther K. Smith at their table.

Akashic Books was interesting to talk to.  One book that caught my attention was a collection of Caribbean poetry, So Much Things to Say: 100 Poets from the First Ten Years of the Calabash International Literary Festival edited by Kwame Dawes and Colin Channer.  They also have a blog.


Many of the booths had local literary magazines like N+1, small press authors, and small press publishers.  The Strand Bookstore was there as well as Greenlight Bookstore.  I have never been to Greenlight.  There some literary groups like Poets and Writers, The Center For Fiction, and the Writers Studio from Manhattan.  I picked up a copy of the latest New York Review of Books.

Gryphon Books was a bit nostalgic for me  http://www.gryphonbooks.com/  Gary Lovist, the owner of the press writes The Antique Trader Price Guide to Collectible Paperbacks.  He also runs the Collectible Paperback Show in Manhattan which is coming up on September 19, 2010.  http://www.gryphonbooks.com/Gallery/DivaAd.html  I found the show to be quite interesting when I went there.

I kept track of a few titles in a notebook which I carry while was walking around; The Flatiron: The New York Landmark and the Incomparable City That Arose with It by Alice Sparberg Alexiou , The Wilding by Benjamin Percy, and  Everything is Going to Be Great by Rachel Shukert.

I also got two free poetry books, Heredities Poems by J. Michael Martinez and How To Live on Bread and Music by Jennifer K. Sweeney.  These were courtesy of the Academy of the American Poets http://www.poets.org/

There was an Advanced Reading Copy of Burnt Books Rabbi Nachman and Franz Kafka  by Roger Kamanetz which is coming out in October by Schocken Books.  Schocken Books has a series of Jewish biography which is very well done.

It was a pleasant walk in the light rain.  I filled my bag with various pamphlets, bookmarks, buttons, and catalogs which I will look at when I get back to work on Monday.
Posted by Book Calendar at 1:35 PM