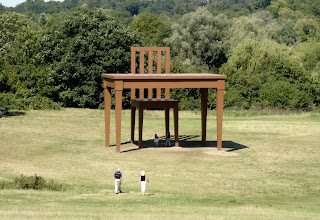 I finished reading The Gaslight Dogs by Karin Lowachee.  She also has written Warchild which is excellent.  Her website is http://www.karinlowachee.com/

I added April and May of 2008 to my list of book reviews. I actually erased one of the reviews and did some minor editing on the review on Tony Millionaire's Sock Monkey.  I can see a considerable difference between the writing I am doing now and the writing I was doing two years ago.  Writing this blog has improved my skills considerably.


Ossining Public Library is amending its charter to become a school district library.  This is very similar to the library I work at. They also have two open board of trustee positions like us. They are going to have their budget go up for a vote as well.  We will most likely have our budget go up for vote in 2011.  I think that there has been a push in New York State to put a lot of libraries budgets up for vote and change their charters to school district libraries.   http://yorktown.lohudblogs.com/2010/09/02/ossining-library-board-votes-to-amend-charter/


The changes which I have been experiencing at the place I am working have made things very uncertain.  In the near future the libraries budget will be put up for vote.  There also may be funding cuts.  In addition, there was a recent attempt at a reduction in force.  This creates a lot of uncertainty surrounding the January budget. The general environment in libraries across the nation right now is one of funding cuts and layoffs.

Even if our budget turns out well, we will be facing an interesting challenge in 2011.  In 2003, the New Rochelle Public Library Foundation spent $8000 dollars to campaign for the library budget.  New Rochelle is one third the size of my city.  It could possibly run quite a bit more than this considering inflation and the number of people that have to be reached. http://www.nytimes.com/2003/05/11/nyregion/education-stickering-over-that-old-date.html?scp=7&sq=school%20district%20library%20vote%20new%20rockelle&st=cse

I have to evaluate my own position and be prepared in case things don't work out well.  I have some time to systematically look at my options.

I took some time to watch part of Coraline the animated movie.  There is also a graphic novel and a book written by Neil Gaiman. The graphic novel is illustrated by P. Craig Russell one of my favorite comic book artists. I like the message underlying the film so far.  It reminds you that perfection has a high cost and being real is very important.  I think I'll finish watching it tomorrow.
Posted by Book Calendar at 7:20 AM