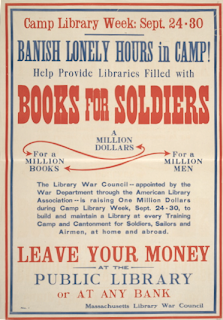 "Banish lonely hours in camp! Help provide libraries filled with books for soldiers A million dollars for a million books for a million men--Leave your money at the public library or at any bank. The Library War Council - appointed by the War Department through the American Library Association - is raising one million dollars during Camp Library Week, Sept. 24-30, to build and maintain a library at every training camp and cantonment for soldiers, sailors and airmen, at home and abroad. Massachusetts Library War Council."

Today has been very steady.  I started on weeding the oversize 300s.  Sometimes even doing a small amount is enough to get things going.  I also gathered together some bookmarks and flyers for my colleagues who are going to a career fair at the local high school.  A lot of our focus during the last week has been very much about business and jobs.  There is going to be a workshop from the Women's Enterprise Development Center for computers for business.

I also did a few minor things, bringing out some things that needed to be mended from storage, shifting some paperbacks around, and spotchecking the 300s for orderliness.

The young adult department is doing a display for banned books week.  Two books which I suggested for the display are a young adult novel by Laurie Halse Andersen called Speak and the graphic novel Bone by Jeff Smith.  There are of course many of the classic books; The Jungle by Upton Sinclair, The Grapes of Wrath by John Steinbeck, A Vindication of the Rights of Women by Mary Wollstonecraft, The Poisonwood Bible by Barbara Kingsolver, and Slaughterhouse Five by Kurt Vonnegut.  Attempting to censor books often has the opposite effect on reading material.  It makes the books more popular, not less.  Banned Books Week runs from September 25- October 2, 2010 http://www.ala.org/ala/issuesadvocacy/banned/bannedbooksweek/index.cfm

The book, Third World America How Our Politicians Are Abandoning The Middle Class And Betraying The American Dream by Arianna Huffington came in for me to read.  I started reading it on the way home.  It is about the dismantling of the middle class by government and business.  It describes the process of creating massive industries based on personal credit and foreclosure of property. Arianna Huffington describes how some elements in government and business feed off the middle class pushing people into poverty, then create mechanisms like payday loans, complex bankruptcy and foreclosure laws, and expensive healthcare to reinforce this poverty. http://www.huffingtonpost.com/thirdworldamerica

There is a strong liberal theme in this book.  It argues against the dismantling of the safety net for the middle class.  There is a lot to think about in what this book is saying so far.  Hopefully, it will spark some interest in change.

This book would also tie in well with another book Broke, USA: From Pawnshops to Poverty, Inc.How the Working Poor Became Big Business by Gary Rivlin who is a journalist for the New York Times.  This book also has strong polemics in it.  It is about the poverty industry, payday loans, credit repair groups, pawnshops, rent to own furntiture and similar financial schemes.  Sadly, this is a growth industry in our current economy.
Web Bits

Four color inkjet printers from Hewlett Packard.  This could make print on demand even cheaper.  http://bit.ly/aZB8v8