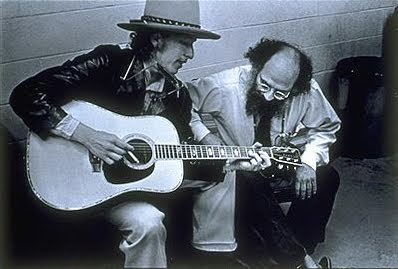 This image of Bob Dylan and Allen Ginsberg is licensed under Creative Commons Attribution License 3.0. This picture was taken in 1975 by Elsa Dorfman.

While I was walking to get some spinach pies at the local deli, I came across a garage sale. They were selling hardcover books. Among the books was Howl and Other Poems by Allen Ginsberg with an Introduction by William Carlos Williams. It cost me $1. This book was very interesting. It is beat poetry dedicated to Jack Kerouac. It was the source of a major obscenity trial. Quite, frankly, I did not find it to be that obscene. It was more interesting than anything else. I found the poetry might be offensive to someone with conservative moral values.
I also walked up to the library today and checked out two books. The first was Dean Koontz's Frankenstein Prodigal Son, the graphic novel. I liked the color artwork. The story was horror in the grotesque sense. Victor Helios's creations are stalking New Orleans killing people. The Frankenstein monster is the hero in this story.
The artwork is in full color.It looks like it was done with a digital palette. The use of panels is very interesting. They are in a variety of different shapes and sizes with very few gutters. This makes the graphic novel arresting to look at. The coloring is excellent, especially the use of shading which brings out light and darkness in the panels and highlights the actions of the villains.
I also read Frankenstein Prodigal Son in paperback. It is very close to the story in the novel. It only makes the novel much clearer. It is escapist reading telling a different twist on the original story of Frankenstein.


I also picked up another book, The Whuffie Factor Using The Power of Social Networks To Build Your Business by Tara Hunt. Whuffie is a term invented in the science fiction book, Down And Out In The Magic Kingdom by Cory Doctorow. Whuffie is a form of social currency which increases ones standing. You might call it, ones ranking in social networks. I rather like the idea that Whuffie is taking on a real world use.
Posted by Book Calendar at 1:33 PM