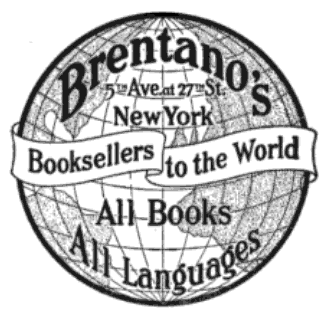 This is an advertising image from 1916 for Brentano's books. There used to be a Brentano's Bookstore near Rockefeller Plaza in Manhattan, New York.
Daily Thoughts 9/29/2009 Today has been kind of interesting. We moved some furniture. We have an octagonal display table which we moved near the "new arrivals" section this morning. This adds to two small display tables which are there now. We now have a lot of display area.

I did some more weeding of the 800s. It is moving along slowly.

We also had a salesperson from Sentry Technology Corporation come to visit us. He demonstrated a self-checkout machine for libraries. The design was kind of interesting. It was based on automatic teller machine technology. You could see the words up close, but not from very far away. It also did renewals for books and if we wanted returns. I would imagine having automatically generated fines would be interesting for us. The system is called QuickChek Kiosk. http://www.sentrytechnology.com/librselfcheck.htm A number of local libraries already have the system. Most only use it for checkout and renewing books. They had three handouts which they gave away.

Another book came in for me to read, The Windup Girl by Paolo Bacigalupi. Sometimes, I like to just browse through images in books. If you want to look at gadgets, Design Revolution 100 Products that Empower People by Emily Pilloton is kind of interesting. It includes images of things like a one handed tourniquet, a mobile water purification truck, spider boots for anti-mining, and zipcars. It is rather interesting.

This is a very interesting article from The Guardian in the UK. It is a plan for a national library card which links all libraries in the United Kingdom together. This is a major step forward for them. In the United States, it is hard to even get interlibrary loan from outside our county. We have a countywide library system. In Manhattan, New York there are three library systems, New York Public Library, Queens Library, and Brooklyn Public Library. Imagine if you could go to any library in the United States and check out a book using your library card. It would be a tremendous step forward. It would open up learning a lot.
http://www.guardian.co.uk/books/2009/sep/28/every-library-a-local-library


A new term from John Clute for fantasy and science fiction. A little turgid but interesting. I have a signed copy of the Science Fiction The Illustrated Encyclopedia by John Clute at home. I like looking through it for the signatures of many different authors as well as pictures of book covers. http://www.locusmag.com/Perspectives/2009/09/john-clute-fantastika.html

Posted by Book Calendar at 4:11 AM