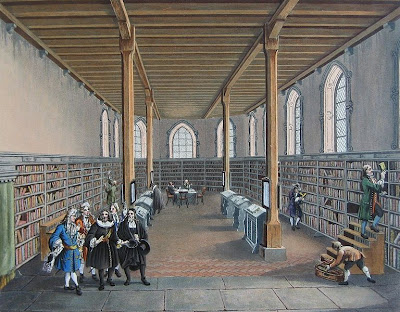 Today, I have been working on various things which are designed to boost circulation. We have been putting up more displays lately. We currently have a display of graphic novels, a display of current events, a display of books on Africa and Egypt from our storage section, and a display of oversize art books. This is in addition to the "new arrivals" section. It is something which we have to keep up every day and make sure there are fresh materials added. Displays seem to work best when people can take the materials directly. I spent some time this afternoon moving the Playaways to the "new arrivals" section. Playaways are a form of preloaded electronic audiobook. They are very easy to use.

I also spent some time going through the purchase alerts list which is what our patrons have been putting on hold. The more requests there are for an item, the higher it is on the list. It has been changing considerably since we put in the new arrivals section and started ordering more books for the job information center and many new books. Some of the sections of books which are doing well are graphic novels and manga , urban fiction, job information center books, young adult series novels like the Vampire Diaries, cookbooks, diet books, and martial arts.

I also have been copying down requests from our patron request sheet where we track what we don't have that our patrons ask for. This makes our library a little more responsive to what people need. I have been thinking about how to better advertise that patrons can request what they are interested in having us purchase for all formats of materials.

This afternoon I spent some time filling requests for different books to go to the book mobile; books about Maine, toy trains, and Norman Rockwell. The book mobile serves a lot of people in nursing homes and the material we send out is often very nostalgic. I also sometimes pick out large print books, mysteries, and biographies for them as well.

I finished reading The United States Constitution A Graphic Adaptation. It is a flawed, but interesting graphic novel. I found the artwork to be rather bland. The colors were in rough earth tones which I did not like. Also, I found the drawing to be not that well defined. It was a little better than what you might find in a comic like Classics Illustrated. There were some interesting gimmicks in the art though, like having a supermajority in Congress represented as a superhero with an American flag on its chest and the head being the congressional building. Every page had a different visual gimmick on it..

The text was far better than the drawing. It was well done. The story was presented in a chronological order from the first constitutional convention, bill of rights, and each of the amendments. This covered a complete history of the United States as seen through the constitution. Numerous prominent Supreme Court cases were briefly described including Brown Vs. Board of Education, Miners School District V. Gobitis (1940), and many others . There was also coverage of the Emancipation Proclamation and many more important events in American history. I have to say the writing was better than the pictures. Read it for the history. I think I learned a few things.

My son was into Manga for a good while. Read a good amount of it. Seems to have outgrown it or moved onto to other things. Not sure what writers or genres he is into these days.

I don't read that much manga, unless it is slice of life type manga-- about real peoples lives or science fiction.