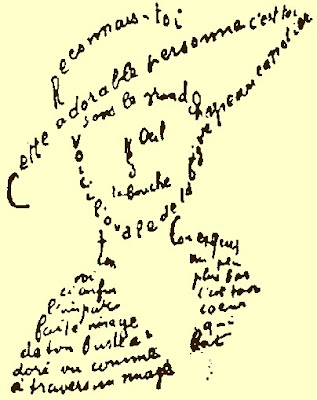 Calligramme de Guillaume Apollinaire
Daily Thoughts 9/24/2009
Today I had a visit from a slam poet. We were discussing how slam poetry was set up. He told me some interesting things. They usually serve tea, coffee, water, and cookies at the libraries where he does the slam poetry. They also don't use a podium, just a microphone on a stand or a wireless microphone. As a prize, they usually give a book and a coffee mug to the winner. The prize is more of a token than anything else. His slams run three hours, first there is an open microphone, then a featured poet, and then a slam. They usually do it once a month in the libraries where he does slams. He often contacts the local schools to get the teenagers to come in.
We also have some new display tables out in front of the "new arrivals". I put out some books for the tables.
Someone also donated some books today. There were two worth adding. We usually try and get more donations closer to when the Friends of the Library hold their book sales. The next one is in November.
I read some more of The Whuffie Factor on the train in to work this morning. I finished reading it on the way home this evening.
Next week is banned book week which runs from September 26 through October 3, 2009. I took some time to look up banned comics on the Comic Book Legal Defense fund. We really don't have any them. A few of them looked interesting like The Salon by Nick Bertozzi which was about Picasso. It had a few nude scenes in it and was part of a court case. There was also a case about the graphic novel Jonah Hex, Riders of the Worm which was interesting to read about. http://www.cbldf.org/ There is also Aaron Magruder's comic, The Boondocks which a number of newspapers in the United States refused to carry.
What Learning Leaves by Taylor Mali was very enjoyable to read. The book is very different thatn most poetry books. Taylor Mali is both a junior high school teacher and a performance poet. He won the National Poetry Slam competition four times in the United States. The poems are meant to be performed from memory. They have a lot of visual imagery in them which can be very arresting.
There is very little introversion in these poems as well. Although they are stories about love, grief, and teaching, they are not overly self reflective. He seems to be making a declaration about the world to his audience in clear terms. There is a little bit of strong language, but it is not overused.
Many of them poems are making statements about the value of teaching and bringing intellectual value to the world in a concrete way. It is a refreshing contrast to whiny intellectualism. Dogs, sex, death, and love also have a place among these poems. Concrete things, important things which speak to everyday life. This book brings a poetry which is easy to relate to because you can close your eyes and imagine hearing the word, "declare!"
Posted by Book Calendar at 11:26 AM