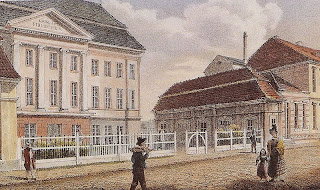 pen and ink drawing of the royal library in Königsberg, circa 1815

Last night, I read some more of War At The Wall Street Journal. It is different than most business books I have read. The focus is on deal making, who talked to whom, when they met, who are the parties discussing business transactions, and why they would meet. There is no dry theory. It is about phone calls, exchanging papers, talking to lawyers, being obsequious, fawning, or demanding, and sizing up the competition.

I have a television, but it is hooked up to a dvd and video player. The only way to get regular reception where I am is to buy cable. This means I watch television once a week at the laundromat while I am folding clothes. It is hard to read and fold clothes at the same time.

A lot of the television shows are now on computer. I watched the Roughnecks Starship Troopers on Youtube as well as a variety of clips from the news. A lot of the news websites will have video clips as well. It is easy enough to get any video coverage you might want to see of events on television on a computer these days. It is also very easy to read the news on Yahoo news, so you see and hear the same news everyone else is getting even if you are not watching television.

Also, I sometimes check out entire series of television shows from my library. I checked out the first season of Star Trek out, I Claudius from the BBC, and a variety of different PBS dvds. This is less bothersome than watching the shows each day. It allows me to watch what I want, when I want to.

This does not mean that television is not connected to the book world. There is even a Book TV, I have never watched it, but it is there. http://www.booktv.org/ Also, many library websites have Books on the Air which http://library.booksite.com/5936/nl/?list=NLAIR which contains a listing of when various authors are presenting each week. You sometimes question whether Youtube is really a separate thing from regular television these days. Almost all television shows are now born digital like books are increasingly becoming born digital.

It is important to think of a book as a package. For example, I read Star Trek novels, but I also watch the shows, and read the comic books. I haven't played the video games. I also have not played the video games for Halo. However, I recently purchased Halo Helljumper written by Peter David which is a graphic novel, as well as the book, Halo: The Cole Protocol by Tobias Buckell. Halo will eventually come out as a movie and after the movie, I can easily imagine it as a Saturday morning cartoon. I read it because I like Peter David's and Tobias Buckell's writing.

This is true for more than just fiction. Ken Burns Civil War is a PBS documentary and a book. So is the Julia Child cookbook. If they can turn a cookbook into a movie starring Meryl Streep, Julie & Julia, they can find out how to package most books.

Think of media packages being born digital as a document, maybe something like an ebook. First they get turned into an ebook, then a physical book, then other products are spun off from them; audiobooks, films, music, posters, website skins, and other things. This can be true of anything from books on horses to horror novels. It does not have to happen this way. Sometimes the movie will be produced first, or the music, or even art work. What matters is that everything is now open to multiple formats of our choice.

This choice will lead to options when we purchase items, we will have a choice, ebook, book, audiobook, and then maybe related films, television, and music.

The line is also becoming blurred between what exactly is a television show, if it is a show you can watch on television or a computer, is it a television show. I don't see programs like authors @ google, http://www.google.com/talks/authors/index.html being that different from watching television. Nor do I see online conference videos like the TED conference being that differenct from watching television http://www.ted.com/ . The lines between the different types of media are blurring.

I put Steamed by Katie Macalister on hold, it is a steampunk romance novel. I also put Ship Breaker on hold by Paolo Bacigalupi. This is a young adult novel. Paolo Bacigalupi just won the Nebula Award for The Windup Girl, yesterday. He is a fantastic writer. I was pleasantly surprised, Paulo Bacigalupi's novels are very inclusive and international in flavor and have a strong environmental and political message.

I also started reading a bit of Readers Advisory Service in the Public Library. The author describes how to do book lists, bookmarks, and other readers advisory tools in this book. I am hoping the book will give me some ideas on how to improve our bibliographies and bookmarks. I just subscribed to Fiction_L which is a readers advisory listserv listed in this book. http://www.webrary.org/rs/flmenu.html

Posted by Book Calendar at 3:38 AM