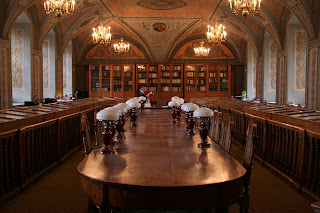 The American Library Association has a new Awards, Grants, and Scholarships page, released on May 22, 2010. http://www.ala.org/template.cfm?template=/CFApps/awards_info/browse.cfm&FilePublishTitle=Awards,%20Grants%20and%20Scholarships&rtype=ALL
Sent out two postcards for the Postcard Campaign to save New York City libraries. http://reforma-northeast.org/postcardcampaign.html

A satirical article from the Huffington Post, Is Print Dead? http://www.huffingtonpost.com/ja-konrath/is-print-dead_b_583959.html?ref=fb&src=sp

I am reading Under Heaven by Guy Gavriel Kay. There are some very interesting things about the novel. The main character, Shen Tai, calls his kingdom Kitai which is the Russian word for China. He also describes Sardian horses. Sardia was a kingdom along the Silk Route. This is a very different style of fantasy drawing from a mix of Eurasian and Chinese history.

There is a feeling that the author has been drawing from readings of both imperial China, and the more eastern tribal peoples. There are pieces of the book that remind me of the Book of Dede Korkut. The story is not just heroic, there is court intrigue, poetry, wine, and love. It is an intriguing read so far.

I just found out that the Comic Book Legal Defense Fund of which I am a member is having a fundraiser at Book Expo America sponsored by Image and DC comics. It should be very interesting.

Posted by Book Calendar at 6:09 AM