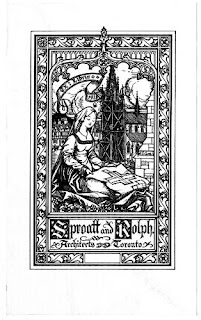 Sproatt and Rolph was a firm of architects based in Toronto; the bookplate (Ex Libris) is dated 1915. It shows a woman kneeling with a blueprint or plan of a building which is being constructed behind her, in the Gothic Revival style.﻿
Daily Thoughts 3/22/2011
I read some more of The Physics of the Future by Michio Kaku on the train.  He is writing about advances in medicine which will extend life expectancy.  He describes things like nanomedicine, restricted diets for reducing aging, regrowing organs using stem cells, and genetic medicine.  It is very much a survey of different technologies that are being developed broken into sections.  There are sections on computers, artificial intelligence, health, nanotechnology, energy, and other subjects.  Right now, I am reading about nanotechnology.
This morning, I updated the Twitter account, checked the displays, and tabulated some more of the surveys.  I also reformatted the author lists for African American Novelists and African American Mystery writers.
I was reading Library Journal today.  They are writing about budget cuts.  It looks like there will be both federal cuts to libraries as well as New York state cuts to libraries.  I imagine there will also be cuts at the county level as well.  There are more proposed cuts to libraries in the five boroughs of New York city.  It seems that there are endless cuts.
I did some more weeding in the mezzanine today.  I plan on possibly scanning some old photographs of the library from the local history room to help create a Flickr gallery of the libraries history.
Web Bits
Plan to eliminate Statistical Abstracts of the United States and County and City Data book in US in 2012 http://bit.ly/eiX4Wm
Posted by Book Calendar at 10:04 AM

Labels: budgets, the physics of the future