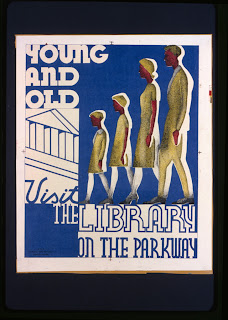 
This morning, I checked the Twitter feed and tabulated some more surveys.  The surveys are interesting to read.  We also opened the computer lab in the rotunda so people could search for jobs.  It went quite well.  There are two handouts we created for internet job search.

Esmeralda Santiago has a novel coming out in July called Conquistadora which is about plantation life in Puerto Rico.  I very much enjoyed her autobiography, When I was a Puerto Rican.  Also John Scalzi is coming out with an authorized version of a book called Fuzzy Nation which is based on H. Beam Piper's Fuzzy books.  Another novel which looks interesting is Embassytown by China Mieville which is about alien contact and language.

Sometimes you see things which are a little funny.  There is a new children's picture book which features surfing called Dude: Fun With Dude and Betty by Lisa Pliscou, illustrated by Tom Dunne.  The title caught my attention along with the review in the March 21, 2011 Publishers Weekly.  It is supposed to be a spoof of the Dick and Jane books.  Another title which caught my attention is Pink Boots and a Machete:  My Journey from NFL Cheerleader to National Geographic Explorer by Mireya Mayor in the March 15, 2011 Booklist.  These are both wonderful examples of how a title can catch a readers attention.  There is a third title which caught my attention as well, this is something I might read; Johnny Appleseed: The Man, the Myth, and the American Story by Howard Means.

The March 15, 2011 Booklist is a graphic novels issue.  I put the the graphic book, Richard Stark's Parker: The Outfit by Darwyn Cooke on hold.  It looks to be a noire graphic novel.

Greetings! I'm glad the title of my book FUN WITH DUDE AND BETTY caught your eye -- glad you caught the humor twinkling beneath the deadpan surface. It's the mashup element which I like a lot too: in the same way I loved PRIDE AND PREJUDICE AND ZOMBIES the first time I heard it. (I can't say I'm as delighted with the title ABRAHAM LINCOLN, VAMPIRE SLAYER quite as much; it may be that the novelty is wearing off. I'm still looking forward to reading it, though.)