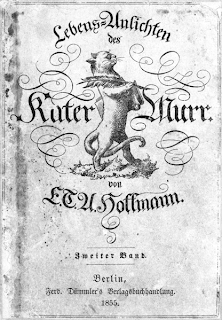 Book jacket with engraving of E. T. A. Hoffmann, Lebens-Ansichten des Katers Murr, third edition, Berlin 1855, volume 2. The title is nearly identical to that of the 1st edition; the jackets of both volumes are identical besides the caption “Erster Band.” and “Zweiter Band.” The engraving showing the learned tom cat Murr is based on an original design from Hoffmann. Hoffmann also gives a description of exactly this picture in his preface to the 1st volume.

I read some more of The Wise Man's Fear this morning.  I like that the main character was a student at a university for magic.  It adds a nice touch of intrigue.

I also updated the Twitter account, entered some surveys and checked the displays this morning.  This afternoon, I checked on the gift books.  There was one I added.

I placed a hold on the novella, The Alchemist by Paolo Bacigalupi; it is part of a book with another novella, The Executioness by Tobias Buckell.  I also placed a hold on a short story collection, Metatropolis edited by John Scalzi.  The Desert of Souls by Howard Andrew Jones also looks execellent.  It is a story set in the 8th century middle east.

I took a few minutes to look through the Mount Vernon Public Library Anniversary Calendar 1896-1946 which has a number of captions describing photographs we are planning on showing on Flickr.  The calendar was produced for the fiftieth anniversary charter of the Mount Vernon Public Library by the University of the State of New York, March 18, 1896.
Posted by Book Calendar at 9:37 AM