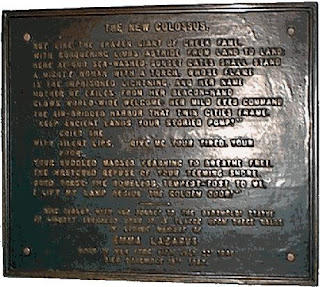 The New Colossus by Emma Lazarus at the Statue of Liberty in Manhattan, New York

Not like the brazen giant of Greek fame,
With conquering limbs astride from land to land;
Here at our sea-washed, sunset gates shall stand
A mighty woman with a torch, whose flame
Is the imprisoned lightning, and her name
Mother of Exiles. From her beacon-hand
Glows world-wide welcome; her mild eyes command
The air-bridged harbor that twin cities frame.
"Keep, ancient lands, your storied pomp!" cries she
With silent lips. "Give me your tired, your poor,
Your huddled masses yearning to breathe free,
The wretched refuse of your teeming shore.
Send these, the homeless, tempest-tost to me,
I lift my lamp beside the golden door!"

I went to the New York Librarians Meetup today.  On the way I read some more of The Information Diet.  The author is describing how we easily get sucked into email and television.  We often will stop and lose all focus on everything else, not exercise, and spend long sedentary periods in front of computers.  This seems to me to be quite true.  I liked his statement of how people constantly seek to clear their email inbox but can never seem to quite do it.

I got to the program a little bit late and I missed the brunch.  I took a walk in the park and sat and thought for a while.  It was a nice chance to clear my head of every day thoughts.

Afterwards we went to the Museum of Jewish Heritage and listened to a lecture on Emma Lazarus which started at 2:30 p.m. called "Until We Are Free", The Legacy of Emma Lazarus.  Emma Lazarus was known for her radical labor and civil rights activism as well as her poetry.  She was extremely controversial in her time.  There was also an exhibit Emma Lazarus: Poet of Exiles.  I did not get a chance to see this.  I only stayed for the lecture.

Oft have I brooded on defeat and pain,
The pathos of the stupid, stumbling throng.
These I ignore to-day and only long
To pour my soul forth in one trumpet strain,
One clear, grief-shattering, triumphant song,
For all the victories of man's high endeavor,
Palm-bearing, laurel deeds that live forever,
The splendor clothing him whose will is strong.
Hast thou beheld the deep, glad eyes of one
Who has persisted and achieved? Rejoice!
On naught diviner shines the all-seeing sun.
Salute him with free heart and choral voice,
'Midst flippant, feeble crowds of spectres wan,
The bold, significant, successful man.

Emma Lazarus
Afterwards we went to Chipotle for a breakout session.  I talked about some thoughts about my work and my place in the world.  I realized now that I cannot really look in a place like the Specail Library Association to find what I am looking for.  I had a chance to discuss a variety of places that had to do with publishing and libraries.  It was an excellent opportunity to reflect on what I was doing.

We went over places and ideas like the Espresso Book Machine, Digital Book World, the International Digital Publishing Forum.  I also mentioned General Assembly and the online entrepreneurship class I was taking.  Some interesting feedback I had was that many of the younger people who are going into startups don't have a whole lot of worldly experience which counts for a lot.

I mentioned that access to Lynda.com and part of the issue being I wasn't quite sure what to focus on.
I got some good feedback.  It was suggested that I look through Publishers Weekly at the job listings as well as the New York Review of Books because I was probably not looking in the right places for what I was interested in.  I also should probably be looking at the Times Literary Supplement.

There was a chance to go over places like Red Room, Library Thing, Findings.com, and other places.  A person mentioned Bibliocommons which is an improved catalog which includes new ways to share information and materials.  http://www.bibilocommons.com

There was also a strong suggestion that I join Metro as a My Metro member because it would help my career and focus.

On the train home, I had a bit of discussion with a librarian who had made a career change from theater.  We talked about the New York University School for Publishing program.  I think I should probably do it.  If only for the chance to be around people who are also doing the same thing.

It was a chance to keep my spirits up.

Posted by Book Calendar at 7:12 PM