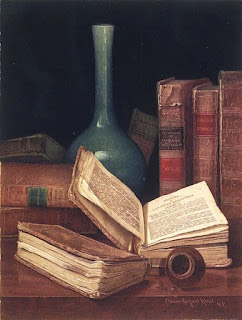 The Bookworm's Table, Claude Raguet Hirst, circa 1890, no known restrictions according to the Brooklyn Museum.


I plan on going to Building a Social Library Room 1E09 this morning at 10:30 a.m.  I updated the Twitter and Facebook page for the library this morning.  This panel features NYPL Labs which works with a variety of social media products.  It should be very informative.There is also the AAP Librarians Book Buzz from 2:00 p.m. to 3:30 p.m.  in room 1E16.

I also did a little updating to the list of places I hope to visit.  I added a few publishers including Atria Books, AMACOM, Algonquin, and Soho.  It should be quite interesting walking the show floor today.  I also plan on stopping by the Librarians Lounge for coffee in booth 2148.

I watched a session that was from NYPL labs about social media. The first presenter that I saw was Ben Vershbow who was talking about Developing Collections with the Crowd.

I learned that their catalog is linked to their Twitter and Facebook accounts.  Part of this is to develop collections with the input of the crowd.  There are a number of collections which are research oriented.

New York Public Library has been digitizing its collection for two decades.  This means they are going beyond adding keyword dsecriptions and metadata.  They are focusing on usable data.  The idea is that they can draw on the cognitive surplus of people who have extra time to help them.  When people are not working or sleeping, they have time to do different things.

They already have 800,00 images in the Digital Gallery http://digitalgallery.nypl.org
It has become a leading open access repository.  Once you have the images digitized you can do different things with them.  For example, you can create data sets with coded maps, you can overlay maps together, you can trace the locations of buildings through time in Manhattan. There is even a tool called a Map Warper http://maps.nypl.org

The New York Public Library labs uses social media to recruit people to help with projects.  For example they are having people transcribe historical restaurant and banquet menus as well as dining car menus.  This creates a record of restaurants prices and items through time.

They are also inventing new applications like the Stereograminator which creates an odd form of 3D image. http://stereo.nypl.org    There really is no limit to the creativity which is possible with the collection.  They have even started working with Boston Public Library with a Flickr Collection to make more steregraminators.

The next person to talk was Angela Montefinise who talked about using Social Media to Reach the Mainstream Media.  She is the director of Public Relations and Marketing.  She tries to make sure she gets reporters on her Twitter and social media lists so they will cover the New York Public Library.

The next person to speak was Johannes Neuer who is the Associate Director of Marketing.  He talked about how Digital Media was planned from the beginning.   There was a Digital Foundation Initiative, a Social Media Working Group, Social Media Policy, and a Crisis Plan. The New York Public Library follows collaborative plan for content curation. There is more than one person working on social media.  For example, Twitter has ten people working on it with people assigned to post in different time periods using the Hootsuite tool.  New York Public Library has over 200,000 followers.

In addition, the content is analyzed using a variety of tools including Hootsuite, Socialflow, Facebook Insites, Google Analytics, and Meltwater Buzz.  This is a lot to work with.

This was a lot to think about.

I saw a few more people from White Plains Public Library.  After the session was over, I decided to finish walking the floor of the conference and collected a wide variety of books from a number of different vendors.  I now have three large bags of books to bring back to my library.  I also had a chance to ask a lot of questions about ebooks and different devices.  I learned a little bit about the 3M Cloud Library, and some other applications.

I also got to see a lot of different books.  There were less galleys than last year.  I was quite tired at the end.  There were a lot of books on psychology, fiction, and young adult.  I did not see as much horror, science fiction, and fantasy.  I did see a few vendors for graphic novels.  Fantagraphics and Image comics were there.  I picked up several comics that were marked as show copies with different pricing.

There was a much expanded digital zone.  I had a chence to stop by O'relly books which had both a digital zone booth and a book booth.  I do like O'Reilly books for devices like the Nook, iPad,  Smart Phones, and Robotics.  O'Reilly even had a few books on programming computers for children which surprised me.

There seemed to be many more educational panels going on.  There was an educational area in the digital zone which surprised me.  A number of people asked to scan my badge so that they could send me galleys and marketing material instead of giving it at the conference.  I noticed that most booths were equipped with a handheld scanner or a scanning machine which read a QR code on my badge.

I also noticed that quite a few people were using mock ups instead of full books.  For example, Lonely Planet had a mockup with 1/4 of the pages followed by blank pages for the Food Lovers Guide to the World which is coming out on November 1, 2012. It looks like a fantastic book.  There are supposed to be fifty different recipes in addition to listings of places to go eat and information about different countries.

By the time I was finished walking the show floor, I was quite tired.  I did not send any books through the mail this time.  I also picked out quite a few things for myself which I will write about later.

On the way home, I read some more of Clean Tech Nation.  I have already read through the section on which countries are leaders in alternative energy.  China is spending huge amounts on alternative energy.  It is the global leader for clean energy production.  Also Brazil is expanding its sugarcane ethanol production, moving into plastics based on sugarcane, and investing in wind power.  Right now, I am reading about the different states and which states are the leaders for wind power.  It turns out that Iowa is the leader in clean electricity production with 15.4% of its energy coming from renewables in 2010.  The statistics are often unexpected.  For example currently, 23% of venture capital money is invested in clean technology in the United States.  This needs to succeed.