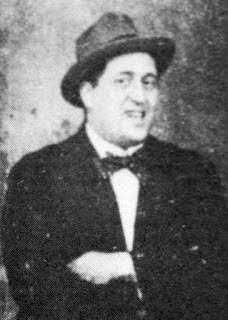 Guillaume Apollinaire (1880-1918) in 1914. Photo taken by photo booth machine in Paris on August 1, 1914 (One photo of a series of photo booth pictures with André Rouveyre - Cropped image). Collection of Marcel Adéma. Scanned image from: Stegemuller, Francis (1963). "Apollinaire, Poet among the Painters". (New York: Farrar, Straus and Company). - - Public Domain in USA: Image taken by automated machine before 1923. Apollinaire died in 1918.

This morning, I started reading The $100 Startup by Chris Guillebeau.  This book is about how to find a passion and create a job from that passion.  It is not about how to make millions of dollars.  It describes in straightforward terms how to create business value from personal interests.    There are many examples from different companies that came from personal interests like coffee shops, airline travel, self publishing, yoga, and photography.  Chris Guilleabeau is describing the process of creating your own job from nothing.  He also talks about how to be a digital nomad and take your work wherever you are with a laptop and cell phone.  It is a different approach to life.

This morning, I spent some time promoting the Annual Adult Summer Reading Contest.  I handed out fliers in the Doric Hall entranceway and gave away bookmarks as well.  Our library is a Carnegie building so it has a lot of wonderful architectural and artistic flourishes like the Fresco in the Rotunda http://www.mountvernonpubliclibrary.org/Library-Fresco.  There is also a display on the program in a display case near the rotunda.   There were a lot of people who were interested in the program. http://www.mountvernonpubliclibrary.org/node/461

I also checked the displays, checked the gift books, and made sure the Twitter and Facebook page were updated.

I spent some time talking about the collection with a colleague this afternoon.  I have quite a bit to think about when I get back from vacation.

On the way home, I read the graphic novel adaptation of George R.R. Martin's A Game of Thrones adapted by Daniel Abraham with art by Tommy Patterson.  This is a story for adults.  It has violence, sex, and intrigue in a medieval setting.  Some of the imagery is striking.  It is a bit different than what I would have imagined in the book. There is quite a bit of nudity in this graphic novel.  It belongs in the adult section.  The story is very strong.  There is also a television show based on A Game of Thrones.  George R.R. Martin writes an introduction to the graphic novel which is entertaining.

My favorite character is the dwarf Tyrion Lannister.  He is often at the center of the story, because he has a lot of wit and sometimes strong, but biting language.  The story is about nobility set in a medieval setting.  The story is epic in scope focusing on the Seven Kingdoms with many different characters.

There is magic, but it is a subtle kind of magic.  Quite a bit of the magic comes in peoples dreams.  I rather liked the Stark's dire wolves.  They are very well done.  This is the first volume in the series.  I think the story followed the book fairly well.

Tommy Patterson's art is highly defined, it reminds me a little bit of P. Craig Russell in his early years.  The coloring by Ivan Nunes adds a differnt tone to it with lots deep reds, blacks, greys, light blues, and light greens giving it a stark feeling.

Posted by Book Calendar at 9:58 AM