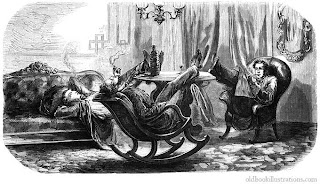 This picture was taken from number 769 of the magazine L'illustration, published on 21 November 1857. Wood engraving after a drawing by Léon Job-Vernet.  They are smoking cigars and one is reading the newspaper.

I read a bit more of It Worked For Me this morning on the train to work.  Colin Powell is writing about how to advance in ones career with a focus on honesty, hard work, and fixing mistakes.  He warns people against creating make work for other people and says that a leaders job is to be at the place where decisions are made.  Some of the material is very down to earth and insiteful.

I also read some more of The Founder's Dilemma.  The author is describing the process of choosing who will be the C level people in a company as well as what it means to be a Chief Executive Officer in a startup.  Noam Wasserman is also describing the tug of war between wanting to be in control versus getting more money.

This morning I helped a colleague with creating a display.  I also checked the gifts, the displays, and brought in some advanced reading copies and publishers catalogs from Book Expo America.

I ordered a new computer for myself from Dell.  Dell has a union discount program.  Our union is qualified through AFSCME.

I also the book Online Community Management for Dummies by Deborah Ng on hold.

I had some time so I looked at Locus Magazine Online and SFSite.  I decided to put an older title on hold, The Age of Zeus by James Lovegrove.

I also looked at the New York Times Bestseller List for Graphic Novels.  There is a graphic novel for the book The Game of Thrones by George R.R. Martin.  It is also a television series on HBO which is extremely popular.  This has also popularized the books.  I put the graphic novel on hold as well as the first season of the show on dvd.  George R.R. Martin hopes to make the series into a 7 volume series.  I am noticing that a lot of George R.R. Martin's books are being reprinted because of the popularity of the five volumes that have been released so far.  The Winds of Winter, the next book in the series could take many years for him to finish.  In the meantime I am looking forward to seeing the television show and reading the graphic novels.


I was looking at http://www.garysguide.org/ which lists tech events.  On Thursday, June 14, 2012 there is a New York Tech Meetup Change the Ratio, Women's Demo Night #1.  http://womendemo.eventbrite.com/?ref=garysguideWhat is interesting to me is that Findings http://findings.com/ and Read Social https://www.readsocial.net/ are presenting which are book focused applications.

Overdrive to Provide Streaming Audiobooks to Libraries and Schools
http://www.digitalbookworld.com/2012/overdrive-to-provide-streaming-audiobooks-to-libraries-and-schools/

Reader Store Gives You More Time To Read Anytime Anywhere
http://blog.sony.com/reader-store-gives-you-more-freedom-to-read-anytime-anywhere
This is interesting, because it is a browser based application that allows people to read and access their ebooks from a web browser.  It changes things because it does not require a dedicated e-reading device.

The Internet Archive has an Excellent Browser Based Ebook Reader
http://archive.org/details/BookReader

Labels: browser based ebooks, it worked for me, the founder's dilemma