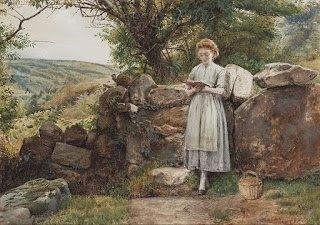 I am back to work.  I brought some of the books from Book Expo America in to donate to the collection.  I also gave a few titles to young adult and sorted through some publishers catalogs this morning.  I am looking at the list of RITA finalists from the Romance Writers of America.  We also got a donation of fiction books including some Beverly Lewis who writes Amish fiction.  I enjoyed going to the conference.  The one disappointment I had was that some of the genre fiction was not there.  There was plenty of romance and fantasy, but not enough horror, mystery, or science fiction.  I also noticed there was a dropoff in the amount of comics publishers as well.  This could be attributed to the growth of New York Comic Con.

Two books came in for me to read, The Founder's Dilemma Anticipating and Avoiding The Pitfalls That Can Sink A Startup by Noam Wasserman and John Sutherland, Lives of the Novelists.  I have two New York Times Book Reviews to read and a copy of Publishers Weekly.  Publishers Weekly had a few special issues at Book Expo America.  One of them was on religion.

I read through the New York Times Book Reviews and put the book It Worked For Me: In Life and Leadership by Colin Powell on hold.  I think it should be an informative book.  I noticed that Publishers Weekly changed its format for bestsellers.  It is now using Nielsen Bookscan which is a big improvement.  This means it will include information on how many copies were sent out to bookstores. http://www.publishersweekly.com/bestsellers

On the way home, I finished reading Clean Tech Nation How the U.S. Can Lead In the New Global Economy by Ron Pernick and Clint Wilder.  I disagree that the answer is to provide more government programs to stimulate clean technology.  I think that it draws the wrong conclusions.  My viewpoint is that the first thing to work on is to make renewable energy cheaper than coal or fossil fuels.  This means I would like to be able to buy wind power at the same price as a coal fired power plant, not pay extra to join a special renewable energy plan from my utility. In many instances, wind power has grid parity with coal.  Also, I would like it to be easy to recycle things.  I believe in the five Rs, reduce, reuse, recycle, recover, and remanufacture.  The easier, the better.  Make it easy and cheap to get clean technology. Give clear explanations on how Cradle to Cradle manufacturing or industrial ecology work.  This should be the same for energy efficiency.  I hate the market hype around renewables.

For me clean technology is like desktop manufacturing with Makerbot and additive manufacturing.  It is local, creates local jobs, and it says to me this will be made in America.   The hype about nanotechnology bothered me a bit in the book Clean Tech Nation.


I started reading The Founder's Dilemma by Noam Wasserman.  This book starts with the founder and of course goes from there with the process of adding people.  My thought is all startups start with an idea and a founder.  The idea is not that hard to come up with, for example, a website that reviews and sells book apps, or reviews ebook originals-- ebooks that will never be in print form.  Or maybe, a publishing operation that focuses on providing downloadable ebooks to educational startups or websites.

Social Reading Is Coming Deal With It
http://jwikert.typepad.com/the_average_joe/2012/06/social-reading-is-coming-deal-with-it.html?imm_mid=089ee2&cmp=em-toc-newsletter-june7-direct
Bookshout and Read Social seem to be on target.  Also Findings is on target.  There will be enough companies for this to be definite phenomenon.

Posted by Book Calendar at 4:15 AM