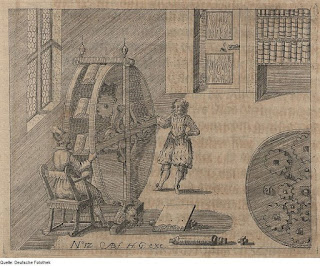 I am going to the Digital Show and Tell from the Book Industry Study Group this morning at 9:00 a.m. at Book Expo America.  It should be interesting.

Right now, I am going through the list of attendees for Digital Show and Tell and seeing who has a Twitter handle so I can follow them.  Occassionally you find interesting things when you do this.

For example, this is a website about different kinds of book apps that are new.
http://newkindofbook.com/2012/06/apps-for-publishers-bea-2012-workshop/
Or an organization like http://artfromkaos.com/

The Digital Show and Tell was very different.  I am going to focus on what I found interesting. We had a chance to visit seventeen different new digital projects.  Each person had five minutes to discuss their digital project.  Then we had one minute to get to the next project.  There was a short break halfway through.  It was an enlightening experience.

One of the presenters was Bats! Furry Fliers of the Night.  I liked this because it was a nonfiction title for kids on bats that used a videogame interface to tell a story.  You could see the bat moving around and flying around a simulated 3D landscape.  There were bits on echo location.  It was quite interesting.  http://www.batsfurryfliers.com/bats/

Another interesting site was Bookshout.  http://www.bookshout.com/    Bookshout is another sharing application that allows people to share annotations in the books they read.  It also encourages people to buy books by making pieces of the annotations sharable through Twitter and Facebook.

Sharing was a theme that was very strong in this years Digital Show and Tell.  There was an annotated link function called Mobnotate which creates links between different ebooks and videos to encourage people to buy other books which linked to a book. http://www.mobnotate.com/

Music Word Media presented its iPad App of the book The Caldwell Collection of Viols: A Life Together In the Pursuit of Music by Catherine Meints.  The illustrations and layouts were beautiful.  The short catalog of work is captivating in a classical sense.  http://musicwordmedia.net/

The application which won best in show was WriterCube, cloud based analytics to map real time data for authors sales against their social media.  It is supposed to help individual authors market their books.  The price was listed at $9.95 a month for the most basic package.  http://www.writercube.com/  It is in beta testing phase right now.

I liked the idea of Steampunk Holmes, but did not like the way it was executed.  The typography and the lack of strong contrasting colors in the images bothered me.  The storyline was interesting and the idea of kickstarter campaign to do a Sherlock Holmes steampunk pastiche was appealing.  If the art work and design was a little bit less dark, I would probably like it.http://www.steampunkholmes.com/p/devices.html

I rather liked the Being Global app which is a children's app focused on learning about culture, food, and music from different parts of the world.  I liked the colorful paintbrushes and the language teaching pieces of the app.  It had a very international flavor to it. http://kitereaders.com/global/

I was curious about the Demibooks Composer which allows publishers to create interactive books for the Ipad without any programming experience.  However, it does not allow people using it to see the process or programming behind the books being made.  It is an interesting quandry. http://demibooks.com/composer/

Another favorite of the people in the room was Gutenberg Technology which creates a complete publishing platform for paper, web, tablets, and smartphones which can simultaneously publish across multiple platforms..  They showed us an example of an almost copy of a hardcover book which they had put on a tablet.  The hardcover book was very nicely illustrated in full color. http://www.gutenberg-technology.com/product-2.php

I watched the presentation on Slicebooks.  Slicebooks allows people to break books into individual chapters, then mix and match the chapters from different ebooks together to create entirely new publications.  The intention would also include the ability to add in magazine articles as well.  This would be useful for example to create custom textbooks for classes from multiple sources.  While I was watching, I noticed that each chapter was priced separately. http://www.slicebooks.com/

I had heard of ReadSocial before and seen it used in Bookglutton.  http://www.bookglutton.com/  However, ReadSocial is also a separate program that can be used as an annotation system.  It was interesting seeing how a single line of annotation could have multiple threads with different people talking about the annotated, highlighted block of text.  There also could be links and images added to the annotations.  The aim was focused on creating social reading groups online with ebooks.  http://www.readsocialapi.com/

Lelivro was an e-book marketplace designed for authors to sell books directly to their readers.  It reminded me of Bibliocrunch which has recently changed from a self published book marketplace to a marketplace to help authors find people who work in the ebook world to finish your book.  It looks like Bibliocrunch pivoted from the Lelivro idea to something else. http://www.lelivro.com

Vleeo is an e-book subscription site modeled after netflix.  It aims to be a "netflix" for e-books.  I think it is a pretty interesting idea.  I am not sure how it would work in the marketplace. http://www.vleeo.com/

I spent a little time on Wavecloud, http://www.wavecloud.com
It appears to be an attempt to make it easy to discover new ways to find books and contact authors.  I signed up and looked around a bit.  It is in beta and looks like it needs to sign up some mainstream publishers.  However, there are mechanisms to share comments, reviews, Facebook, and Twitter.  There are future indicators that it will be able to share videos and photographs as well.

EVN Visual ML was a fairly advanced tool to make ebooks and create repositories of ebooks and other materials.  My impression from talking to the person who was demoing the product, the aim was not to create an easy product, but something that could perform a variety of functions from a central repository: editing, content acquisition, print production, epub production, monetizing websites, and custom publishing..  The website is currently under construction.  http://www.visualml.com/

Brain Dip Magazine created an application to teach multiple subjects; math, science, reading, and writing around a single current event which was one of Barack Obama's speeches. It looks to be based on a fairly radical educational model called Ask-Investigate-Share Learning & Research Methodology.  http://www.braintreeeducation.com/ais/

Free Press Promotional Fiction Sampler was a sampler on five different books.  It included summaries of the books, photographs from the setting, and video book trailers for all five novels published this summer.  This was done with the Adobe Publishing Suite.  It is available as a Kindle Download here http://www.amazon.com/Press-Summer-Fiction-Sampler-ebook/dp/B007SNU1AQ
This is a splash page from Simon and Shuster about it.  http://pages.simonandschuster.com/free-press-fiction

This session was very interesting.  It was three hours of learning about new and upcoming technology.

After I was done, I walked around a little bit more and bought a Peter Rabbit puzzle and picked up some more free items.  I also stopped by the Librarians Lounge and relaxed for a bit.

BEA 2012: The Infinite Possibilities in Digital Publishing
http://www.publishersweekly.com/pw/by-topic/industry-news/bea/article/52378-bea-2012-the-infinite-possibilities-in-digital-publishing.html
Posted by Book Calendar at 2:59 AM