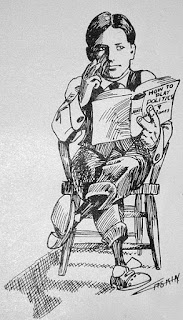 Cartoon in 1909 Tyee (yearbook of the University of Washington). An unidentified man is shown reading a book entitled How to Play Politics.

I finished reading On Politics V.2 today by Alan Ryan.  He finishes by writing about the possibility of there being a world government.  In addition, he discusses the idea that because there are nuclear weapons we are not likely to have another world war.  There is some discussion of the poor demanding more rights and participation in government.  Alan Ryan does not think of this as being a revolution though.

I liked the brief sections on corporatism, environmental destruction, and globalization.  The focus seems to be on acknowledging that people want to have more say from their government on these issues.

Some things which I took away from reading this book is that utopian political ideas lead to violent revolutions.  Mixed government forms as far back as Roman times has been acknowledged to be superior to pure governments.  As time passed ordinary people demanded more and more say in their governments.  The word democracy has become a kind of universal ideal.

I enjoyed reading this book, it gave me a lot to think about.

I spent a little time thinking about our ordering process and the switchover from BWI to Baker and Taylor.  Our final set of orders should be coming in from BWI this week.

I also spent some time thinking about what I plan to do during the coming year.

Posted by Book Calendar at 3:13 PM