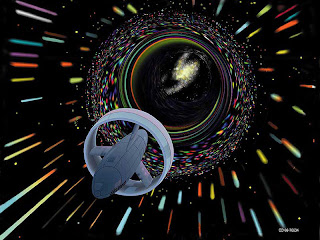 Wormhole travel as envisioned by Les Bossinas for NASA, 1998

This morning, I took a break from reading serious things and read a near future science fiction novel, The Cassandra Project by Jack McDevitt and Mike Resnick.  The story was gripping and I read it one sitting.  The background story was of a secret moonlanding before Apollo.

I liked that the story was not a violent story and had a lot of thought put into it.  It also touched on the issues of commercial space travel and NASA.  The characters were excellent, especially, the main character Morgan Blackstone, the billionaire entrepreneur.  The story was both a mystery and a hard science fiction story.  It was worth reading.  It also described a scenario for going back to the moon by the United States.

I read some more of Management Basics for Information Professionals.  There was a bit on how to tell people what to do without being pushy or offensive.  I finished the Background section and now am starting on the section on Managing Resources.